As the places we covered is quite a long list, I will not put them up in an individual post. It will be based on our Itinerary, and places we covered on that day. A little introduction of my tour, we booked our local guided tour online a few months before we depart for Iceland. Initially, we tried to join another tour agency but in the end, the tour date was cancelled, and we found this local tour company on TripAdvisor instead. The tour covered most of the place we wanted to go and most importantly, it includes Northern-light hunt.

For more information, you could refer to their official website.

I have put in the cost and operating hours so that friends who are self-driving gets to know the details.

I will start from our 2nd day of the tour because there are no sightseeing on the first day. Upon arrival, we checked in to the appointed hotel.

On day 2, we were greeted by our guide at the hotel lobby early in the morning and was ushered to our tour bus, it was a full tour of 36 guests (including us).  This group has a mixture of Asian (5 including 2 of us), most of them were from the nearby European countries. And a few Americans too.

Our winter tour starts with three iconic sites of Iceland, known as the classic ‘Golden Circle’. Prior to that, we were off to our first stop Northern Lights Centre in Reykjavík, a new information centre, where we learn about the amazing natural phenomenon of the Northern Lights, Aurora Borealis. 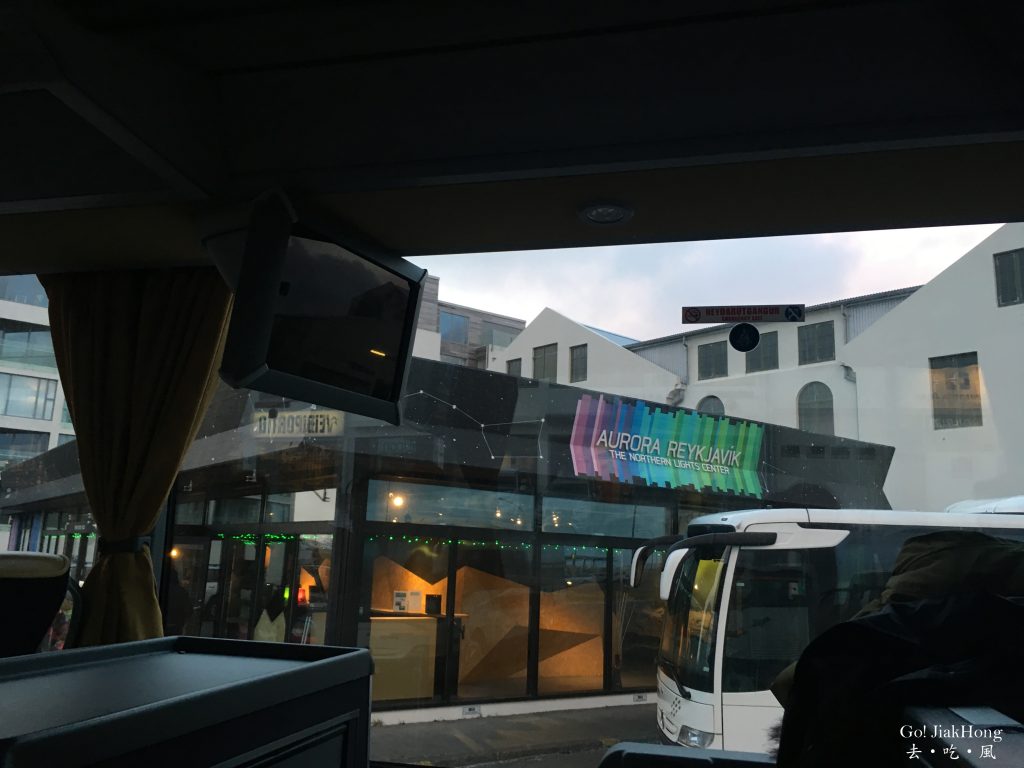 At the centre, there is a professional guide who will explain the history, and we get to learn how people react and cultures around the world, different beliefs on the Northern light. 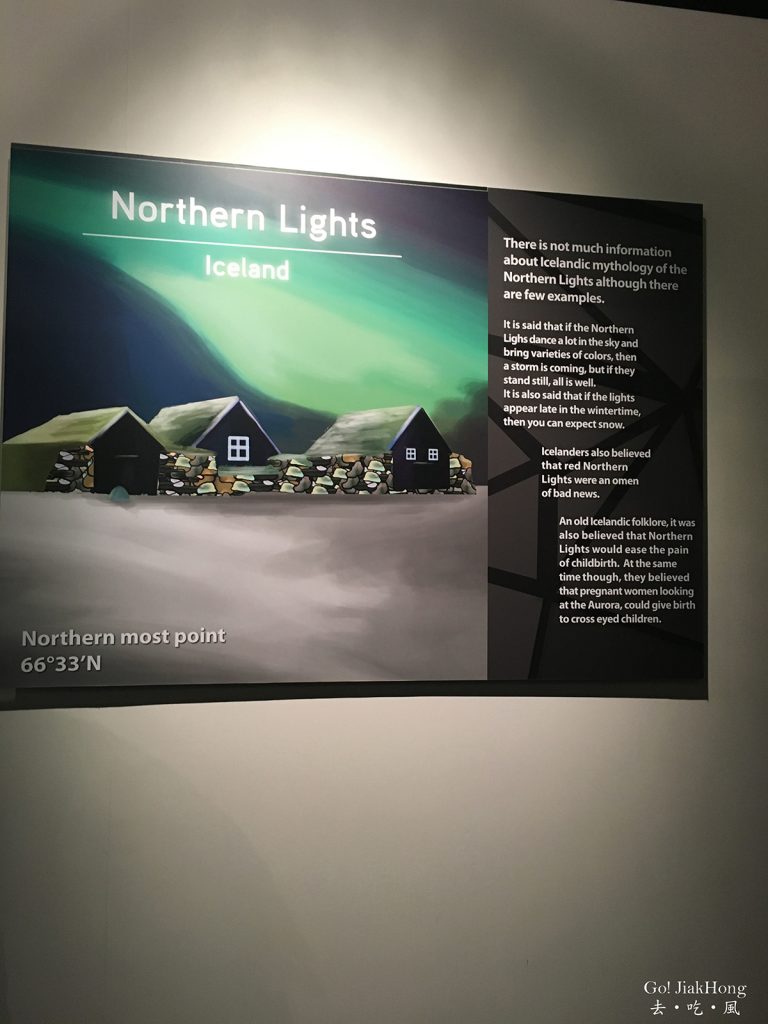 The science behind it: 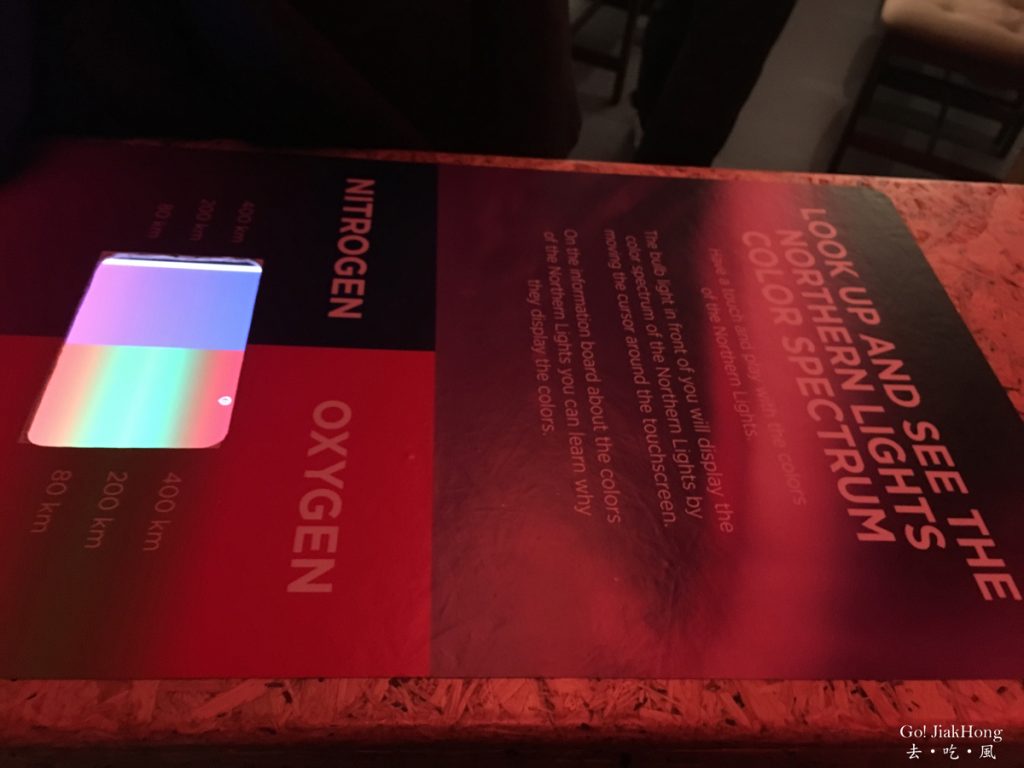 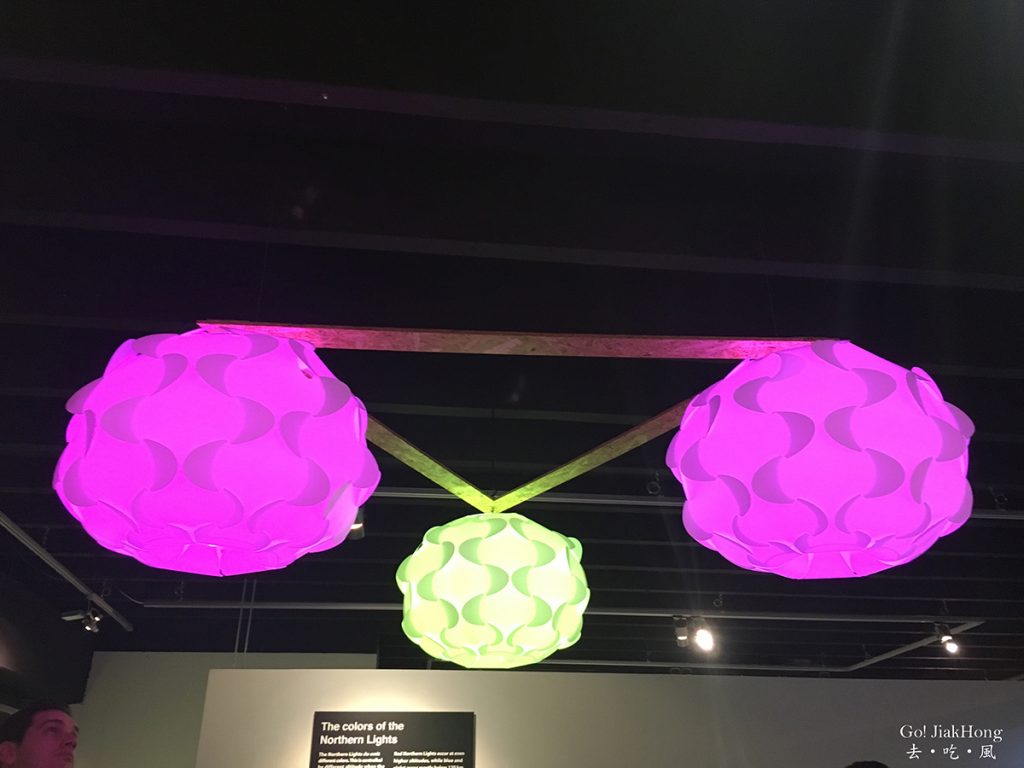 There is this interactive displays screen which shows all the HD Aurora photos: 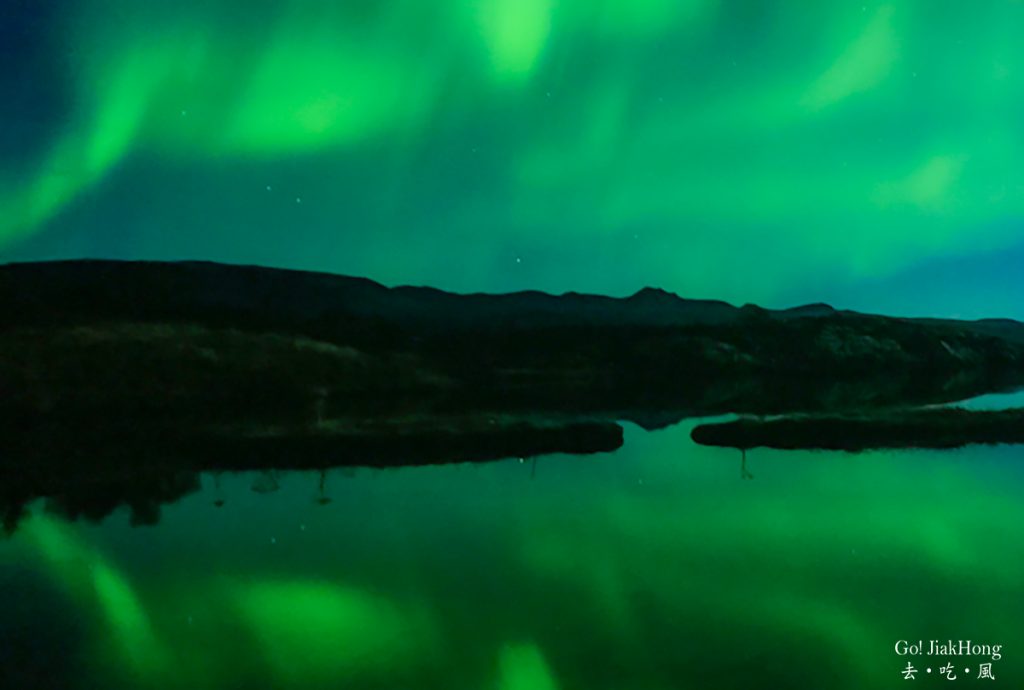 While waiting for the rest of the tour mates to gather, we played with the VR camera at the resting corner : 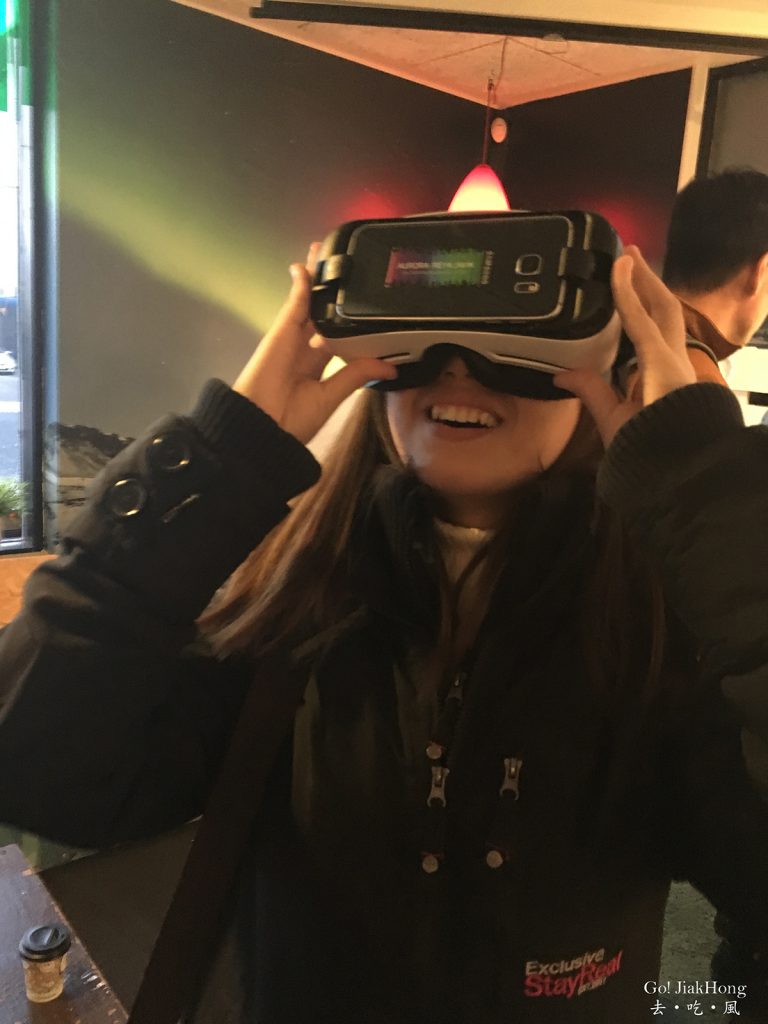 A national park and a UNESCO World Heritage Site in the municipality of Bláskógabyggð, southwestern Iceland. Þingvellir is one of the most visited destinations in Iceland, due to its rich historical, cultural, and geological significance. 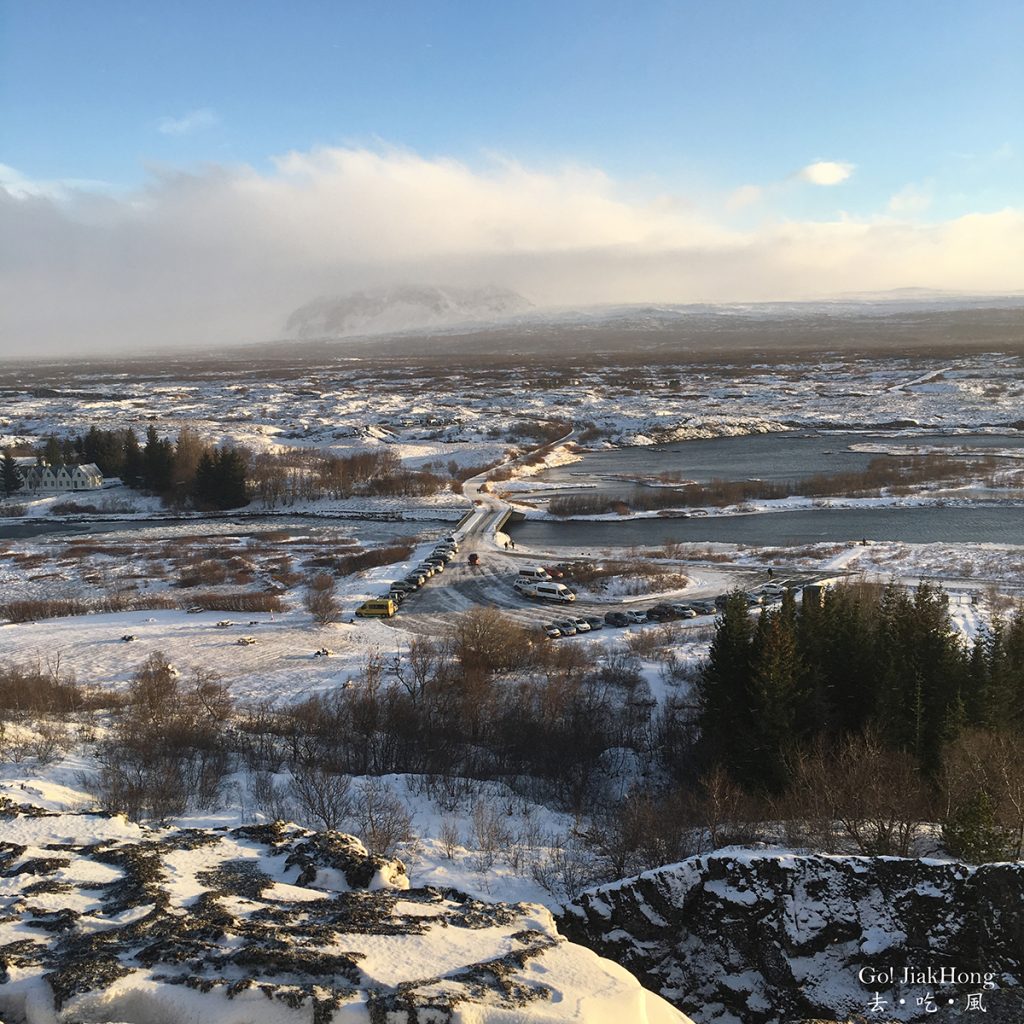 The beautiful view of the continental drift between North American and Eurasian plates in the cracks and faults that traverse the Þingvellir region. Almannagjá, it is the biggest crack where you could have a walk through between the two continents.

We were at the viewpoint, Hakið, where we could follow the footpath that leads down into the great Almannagjá fault,  but was advised by our tour guide not to do so, because it is very slippery. 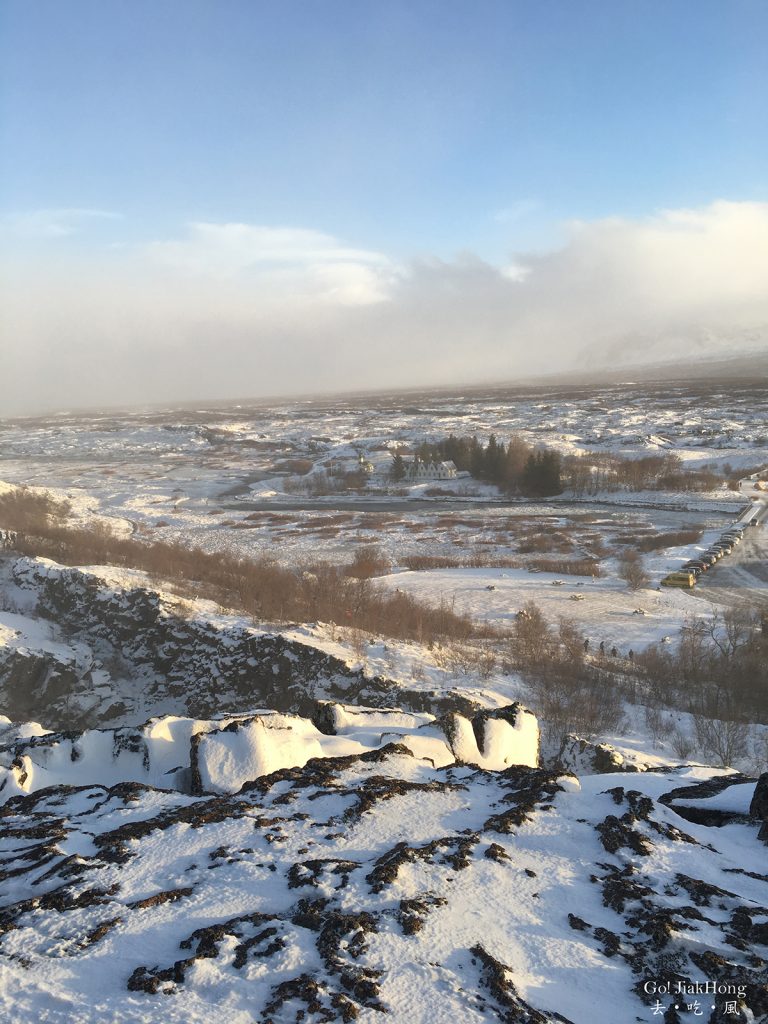 The view was so beautiful~ 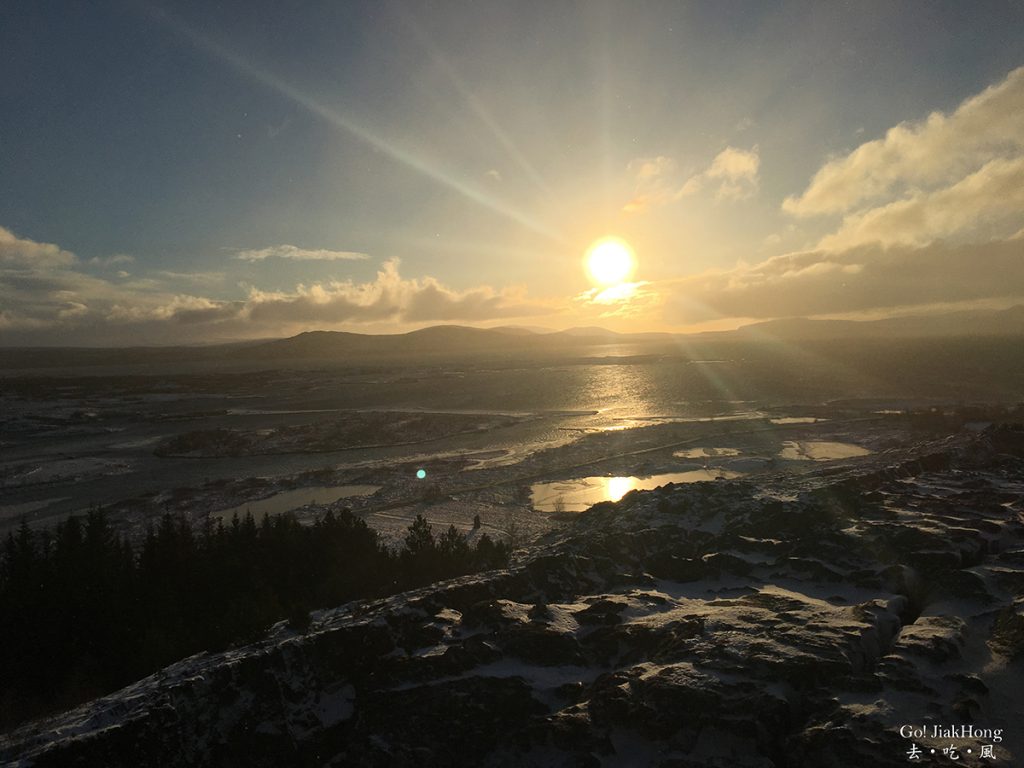 We spent around an hour here, with 30 minutes walking over to the viewing point taking photos and 15-20 minutes having a rest at the visitor centre to have some warmth as it was too cold outside.

Before heading to the famous Stokkur, we went over to this special geothermal culinary treat at Laugarvatn Fontana (Rye bread Experience), where they dig up the newly baked ‘hot spring bread’. 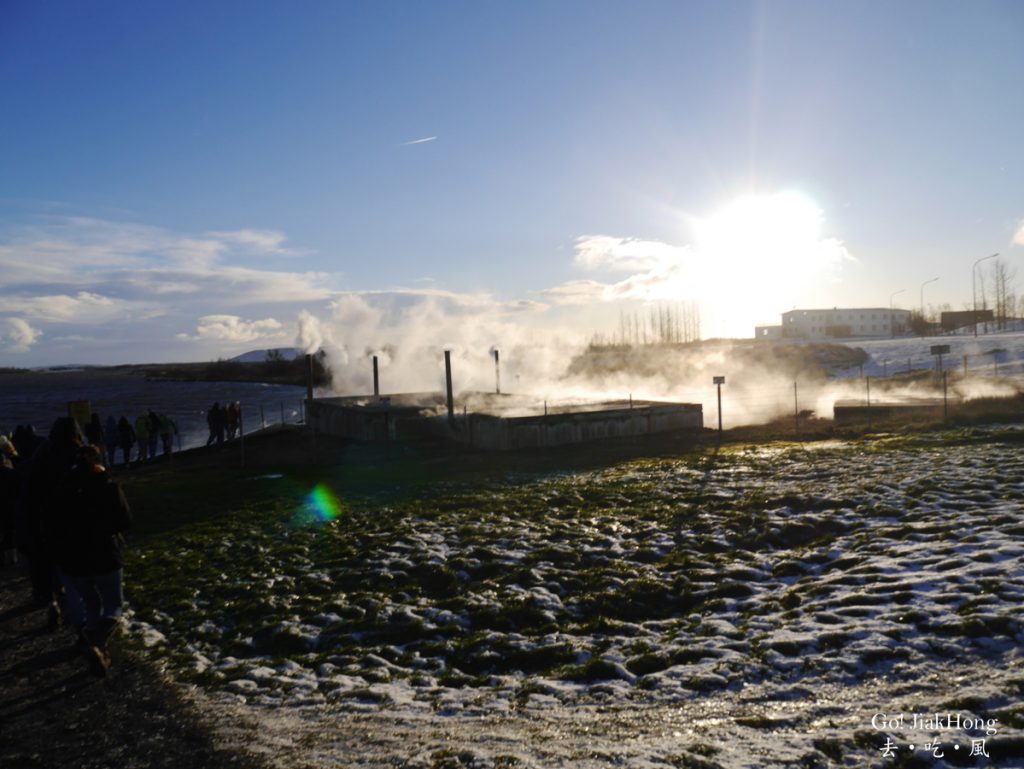 What did we see? 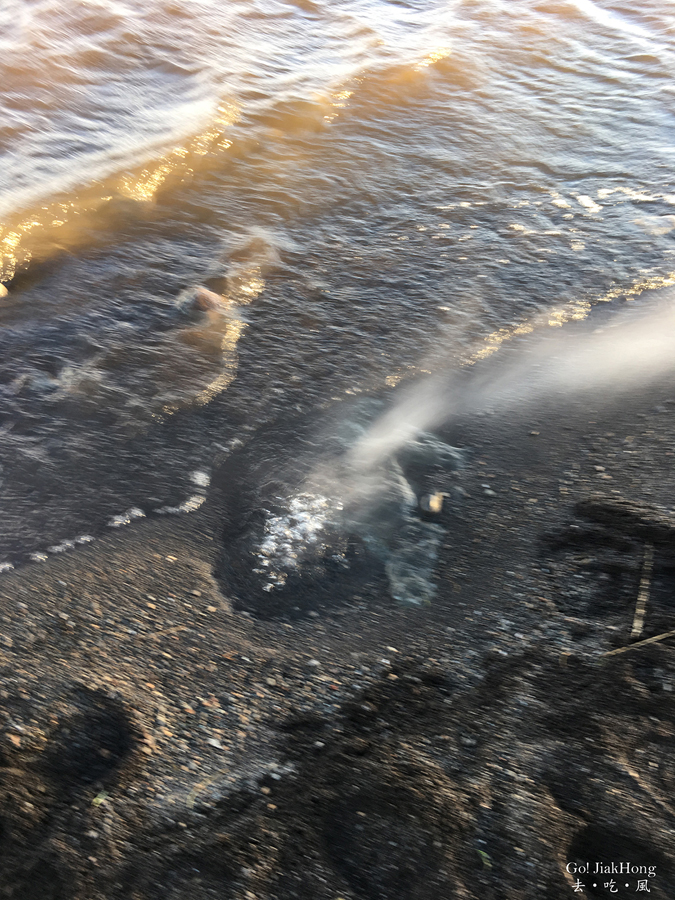 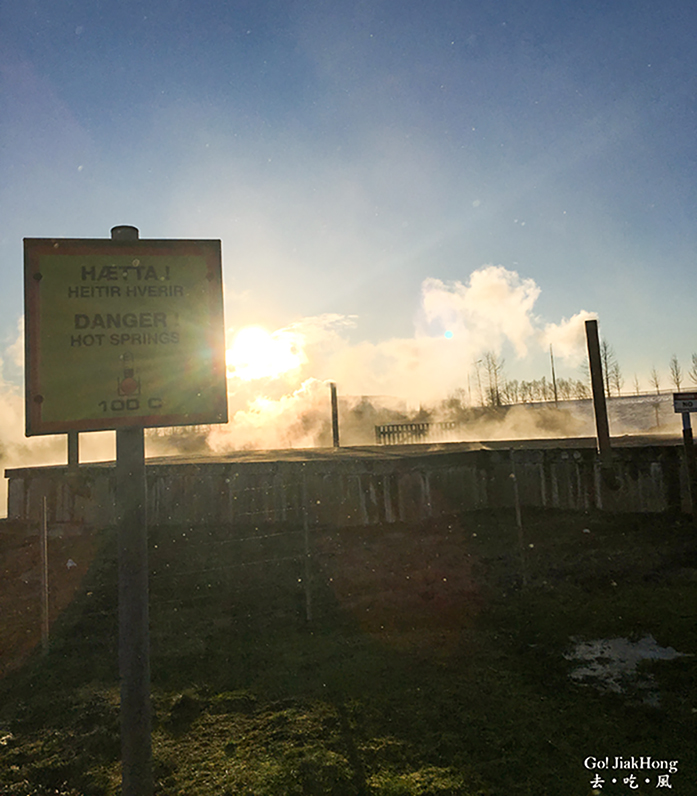 Waiting eagerly for our guide to dig out the freshly baked rye bread, which was buried in the thermal sand for 24 hours. 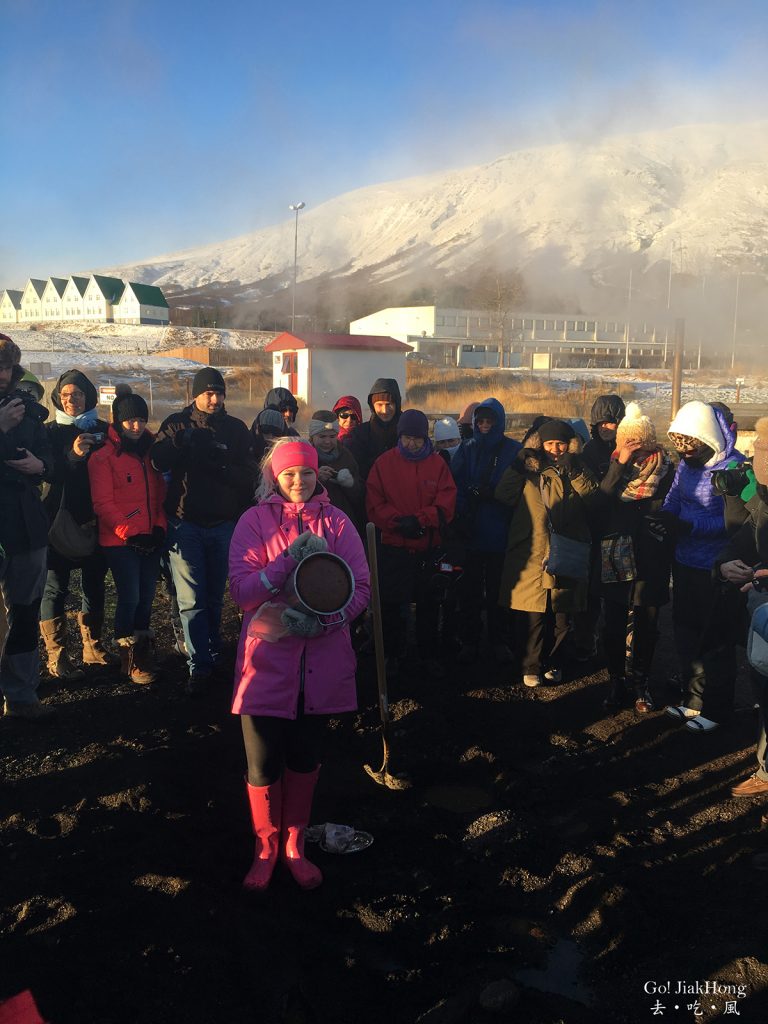 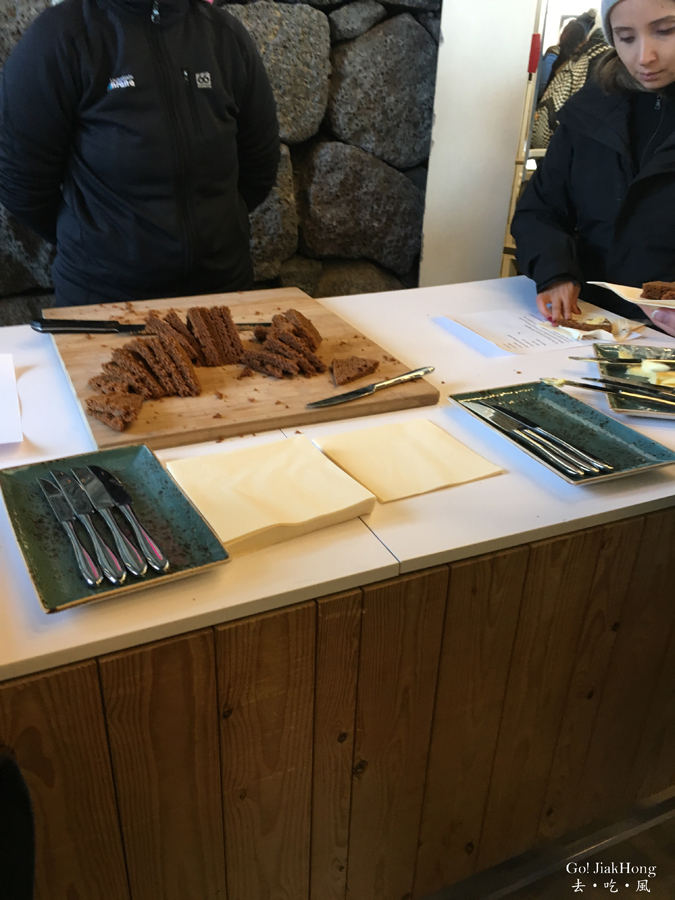 This rye bread with a slice of butter on top is such a perfect combination, and looking at the photo now makes me drool. Our tour guide told us that the bread can be purchased from the supermarket, and most of the Iceland family knows how to bake it, but cooking it in the geothermal sand, just makes it much more delicious~!~! 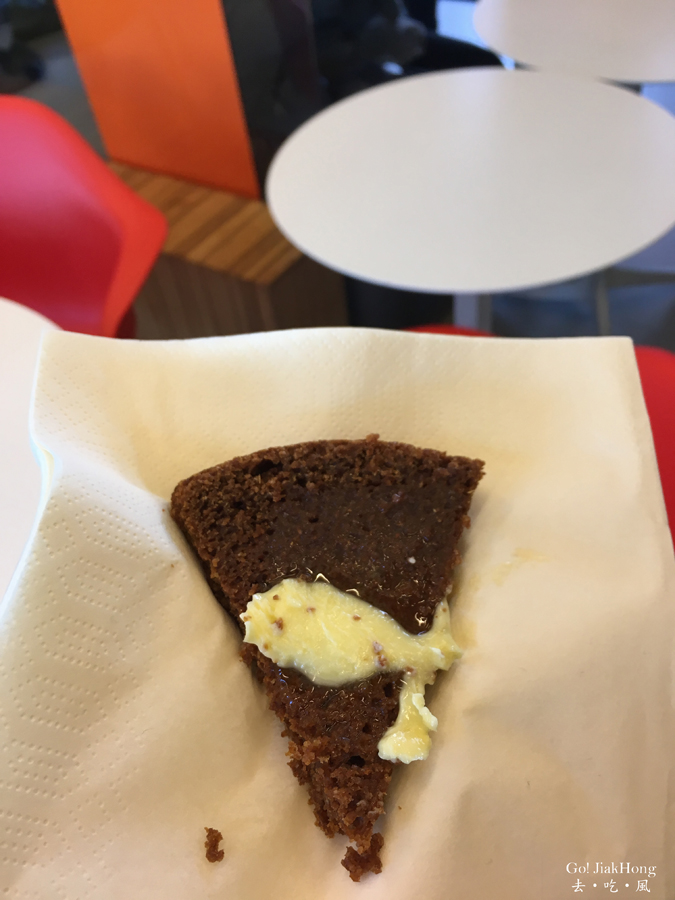 If you want to have buffet/meal that had their food cooked in the geothermal stream, example, boiled eggs, herring and local schnapps, this would be a good place for a stopover.

The geyser Strokkur (the churn), which is currently the most energetic spouting spring in Iceland. It spouts every few minutes, generally less than 10-20 m, sometimes it could go up to 40m high. 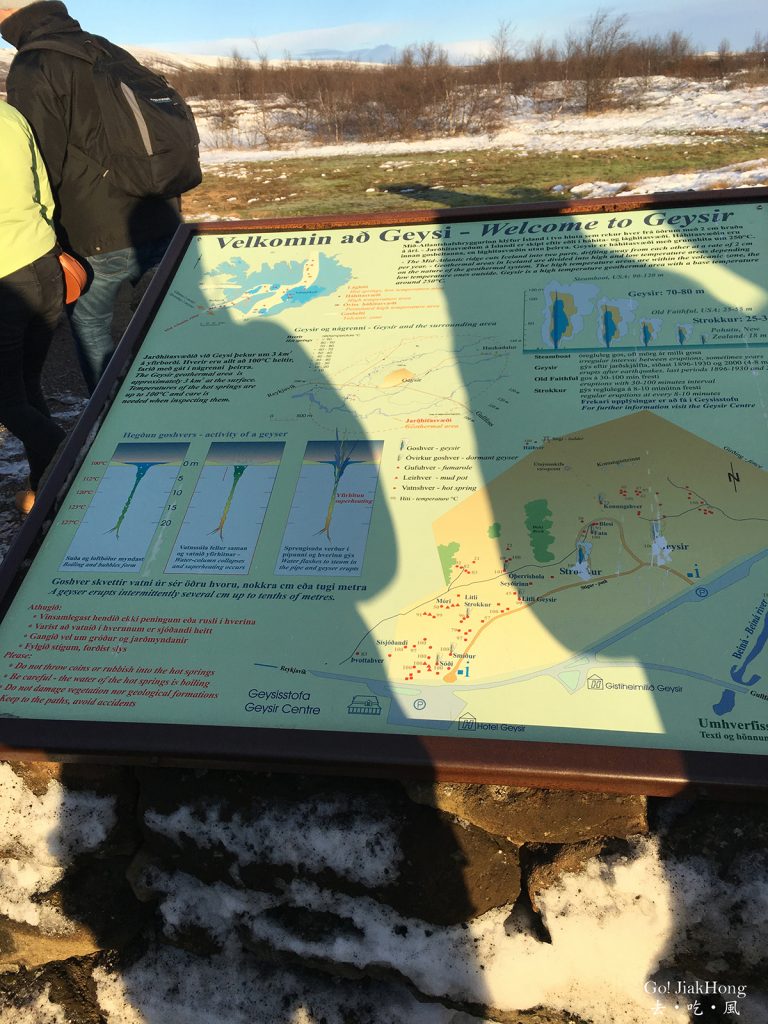 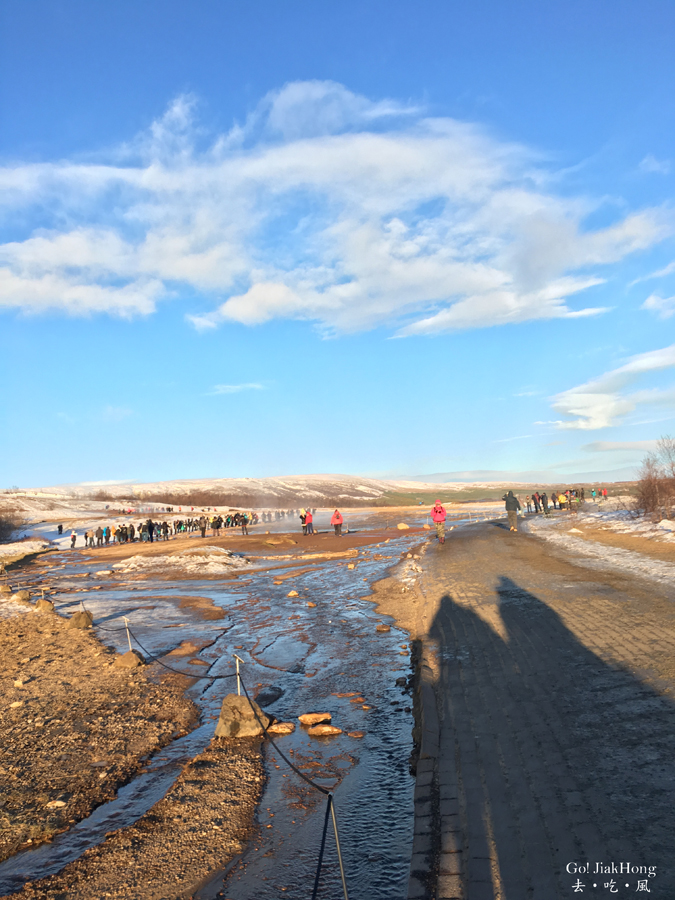 The small strokkur along the side ~ 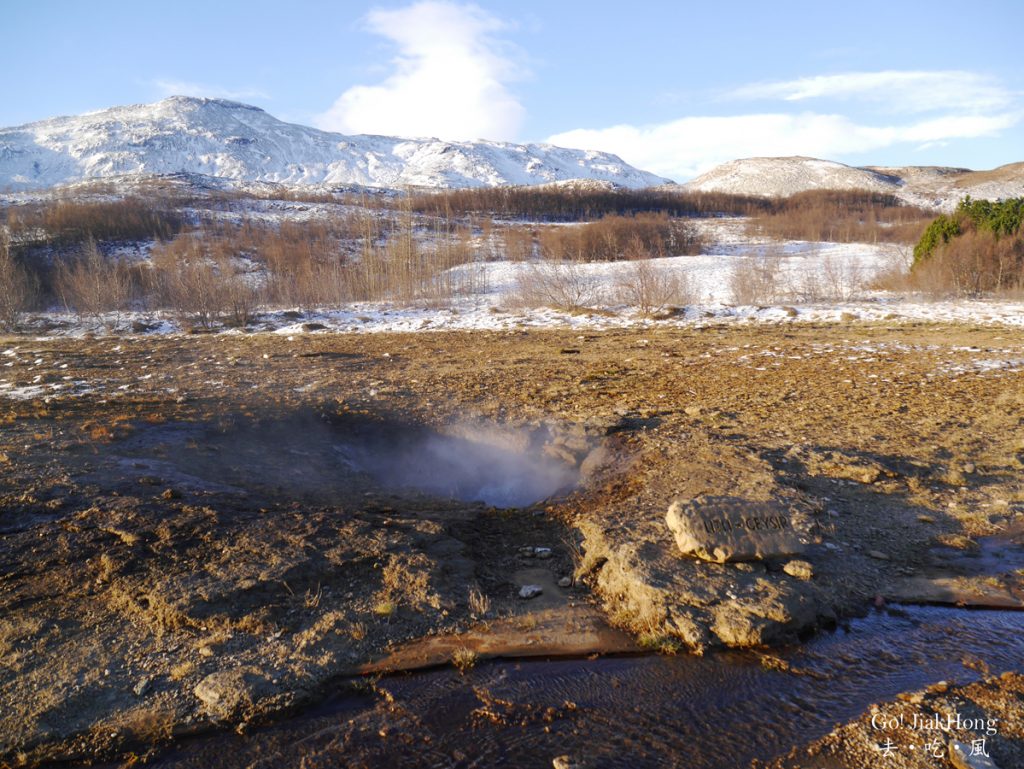 At the main strokkur area waiting for it to erupt: 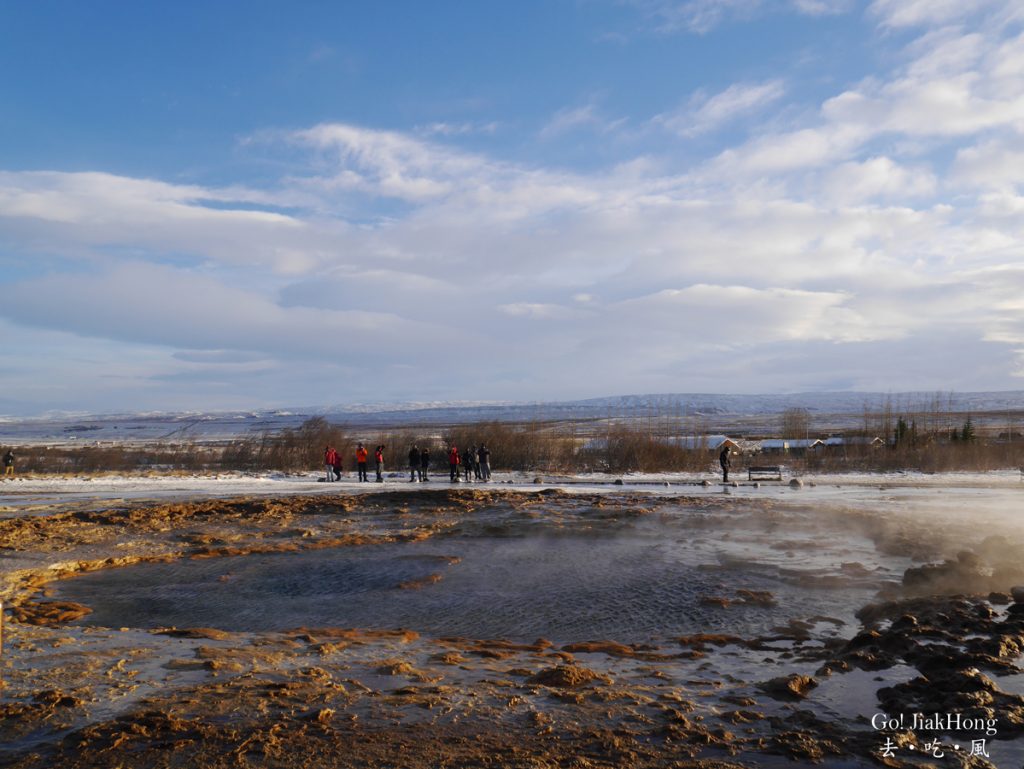 After standing in the cold for 6-10 Minutes, holding onto our camera and phone, finally, it erupts~!~! 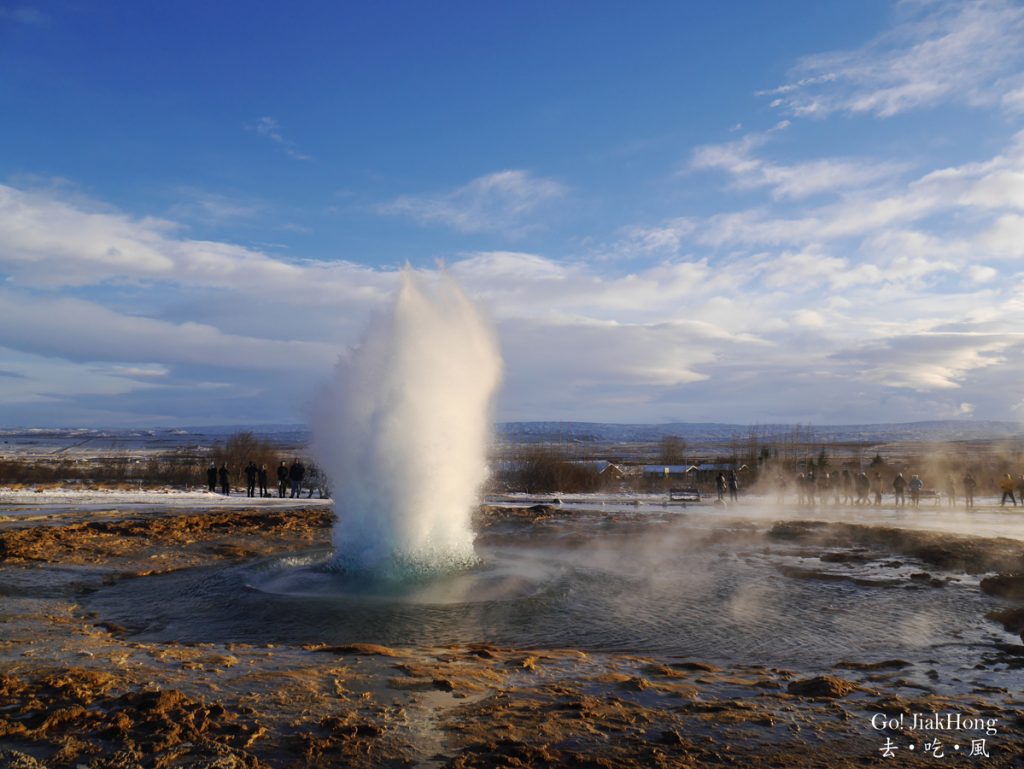 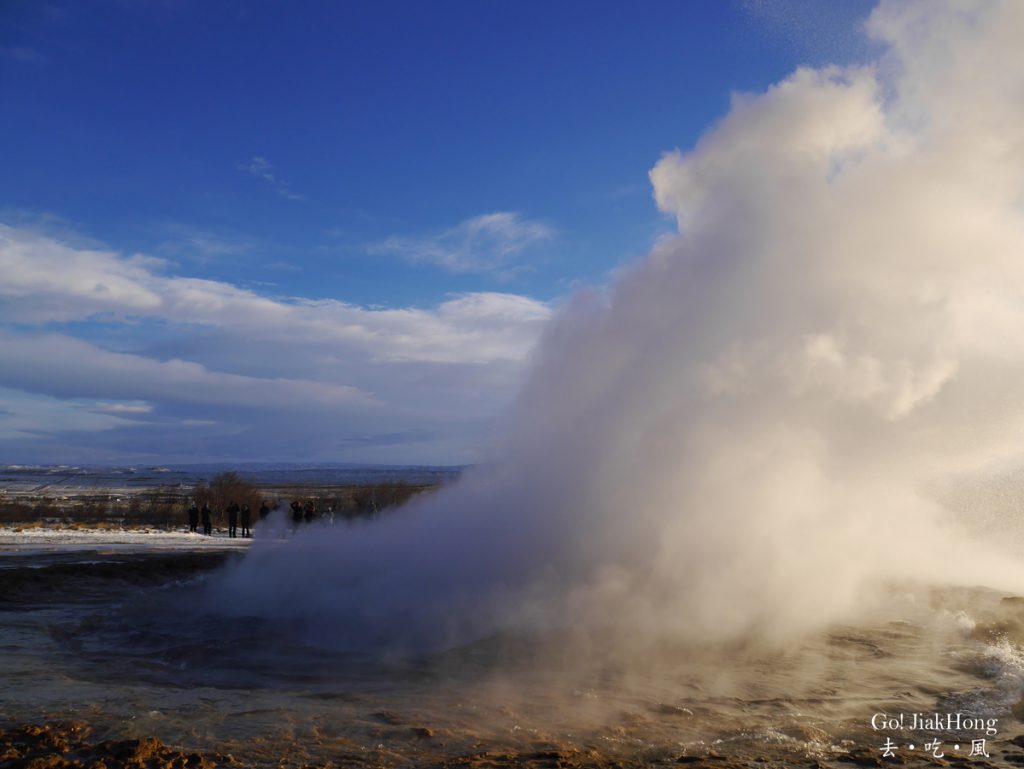 Then it ends, we didn’t wait for it to erupt for the second time and went off for our lunch instead

Free and easy time, we went to the cafe nearby to have our lunch: 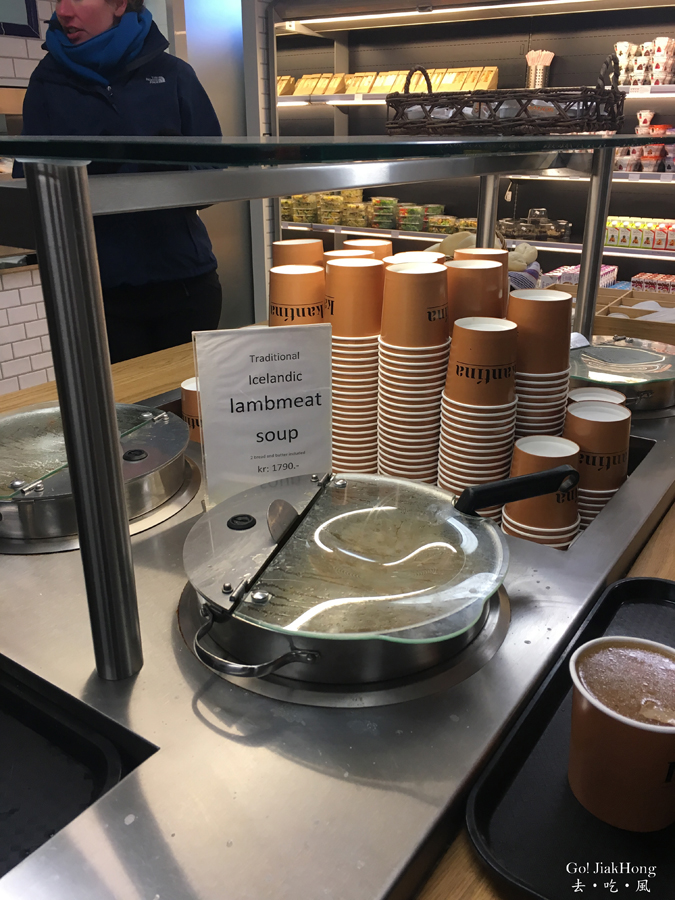 We had the Icelandic meat soup, which cost 1,790ISK. The soup is really good,  just don’t think of the price, you will feel happier~! 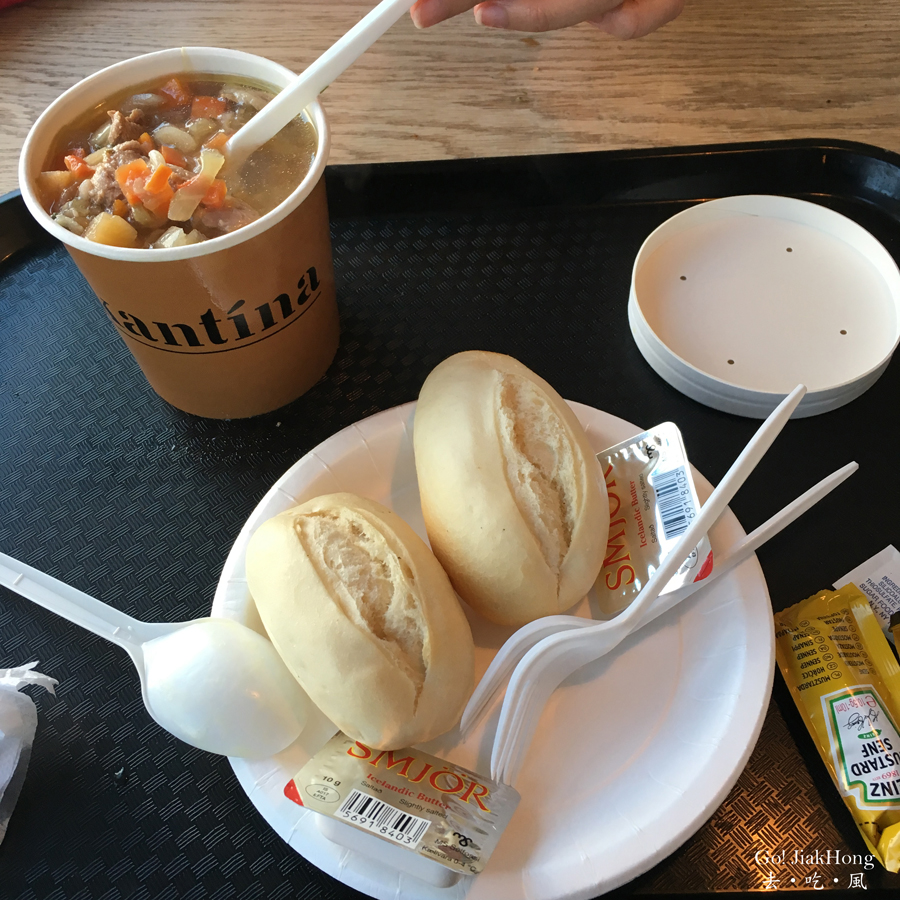 Icelandic lamb meat is a must to eat!! Why do I say so? Because we bought an instant packet of lamb steak from the supermarket back to our apartment to eat on our first day and it was finger licking good! I cannot imagine how delicious it would be if we were to eat it in a restaurant. The cost of a meal at a restaurant will be too depressing for us to handle (T_T)

The iconic waterfall of Iceland offering a spectacular view of the forces and beauty of untouched nature. 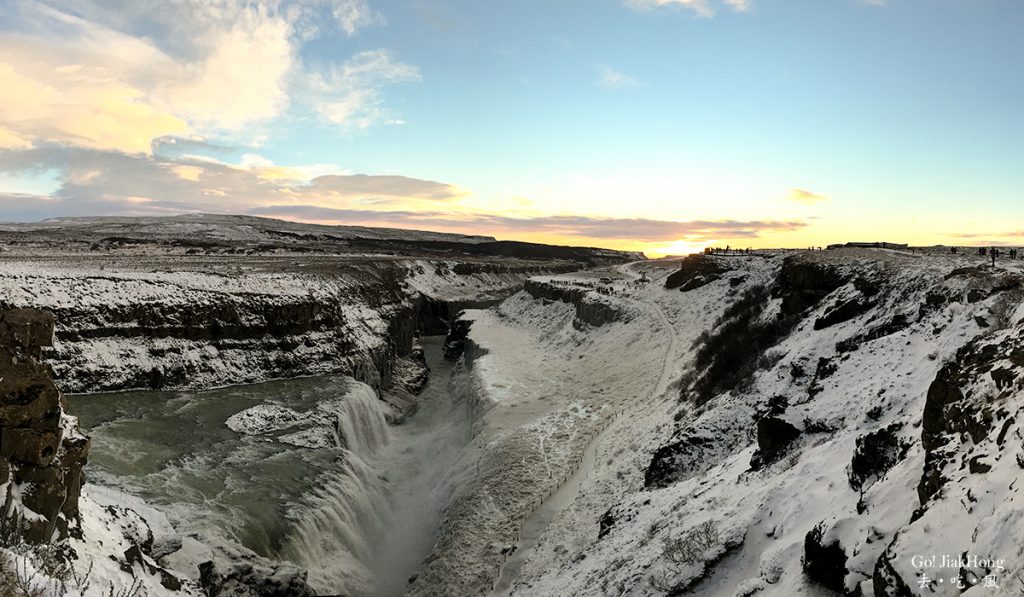 – The Gullfoss has 2 distinct drops in succession at right angles to each other, while spanning the entire width of the Hvítá (white) River.

– There is a story of how this Sigríður Tómasdóttir, the heroine who saved the Iceland’s iconic waterfall from being turn into a hydroelectric plant. A stone memorial of Sigríður was at the top of the falls. where we could read about what she has done to preserve this beautiful waterfall.

What did we see?

The view was stunning~ 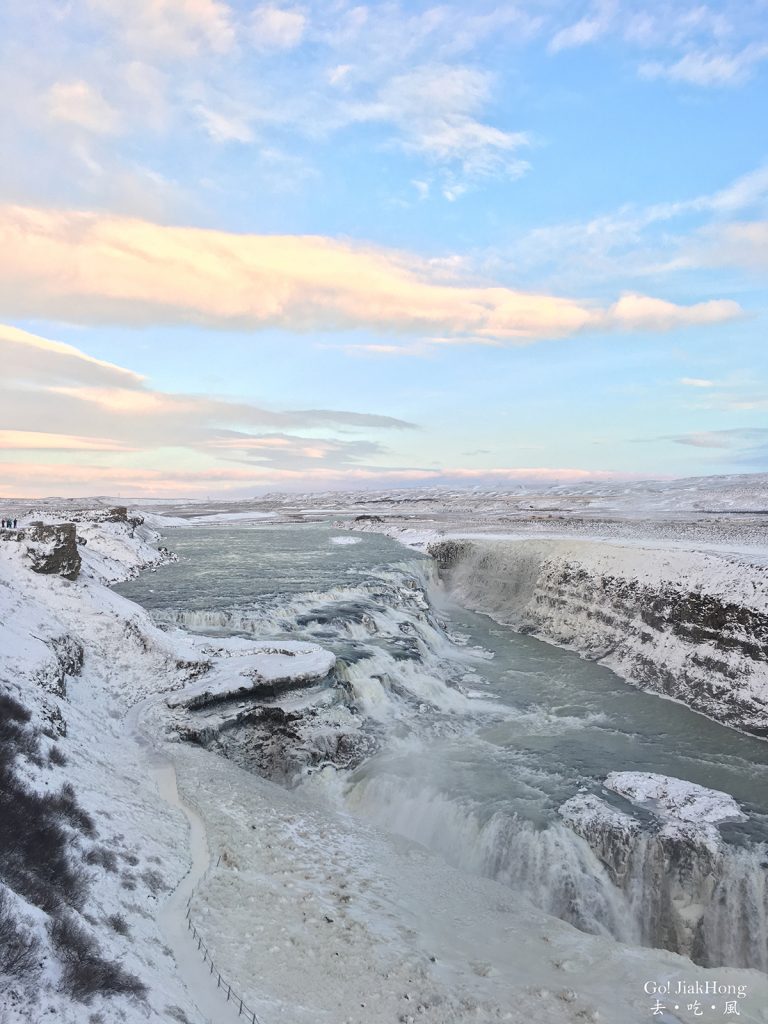 I think that the pictures speak a thousand words for this trip, as all the places we went the scenery was breathtakingly beautiful, especially the Gullfoss waterfall which leaves us in awe of its beauty, we were lucky as the weather was great that day with the beautiful clear sky and sunlight shining over it. It is a place where you could stay there for an hour or so, just to walk and admire the great nature’s work at your own pace.

[Trip] New Zealand- Things to do in Queenstown