What are you going to do if you are given a day in Kanazawa?

After the opening of Hokuriku line in 2015 with only 2.5-hour direct shinkansen ride from Tokyo to Kanazawa, more and more tourist are flocking to this beautiful city which is famous for it well-preserved buildings and history, the next place to visit after Kyoto. I have made a simple compilation on what to do, eat and see in Kanazawa.

Kanazawa, in Japanese it means marsh of gold, it is said to be originated from a legend that the peasant Imohori Togoro who washed the gold dust in a local marsh. The city is the largest city in Ishikawa prefecture, which is located at the Hokuriku Region of Japan facing coast of Japan sea where the freshest seafood is caught not only that, Kanazawa is famous for its gold foil ice cream and other traditional craft and sweets.

For more information, you can check on my previous post.

The famous photo taking place, where the modern yet traditional style wooden torii stood right outside of the station, 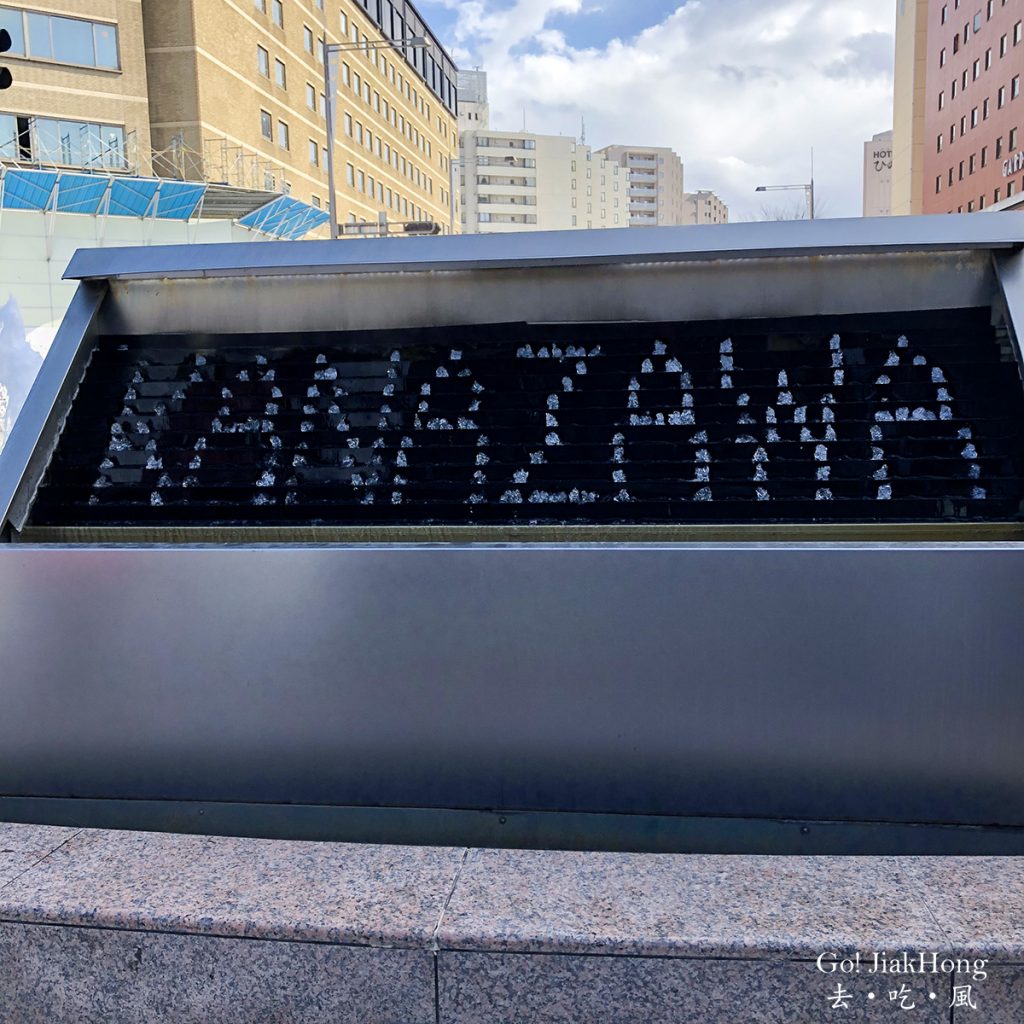 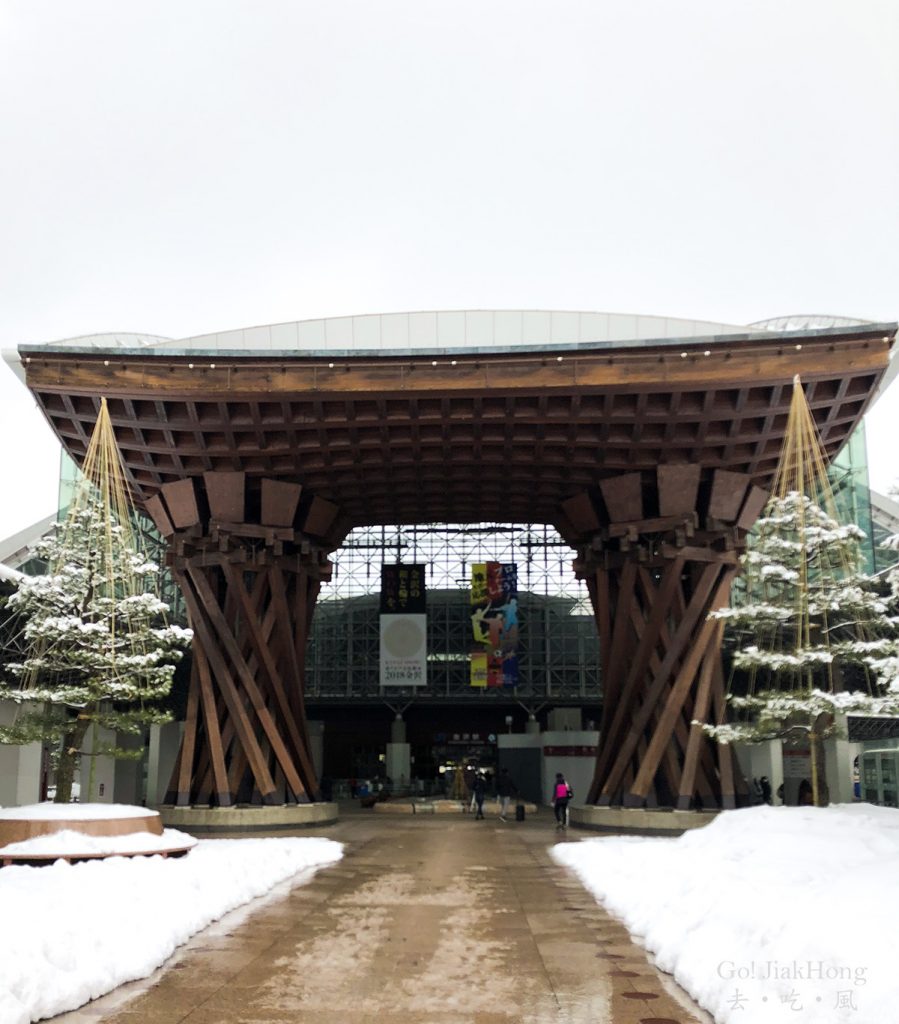 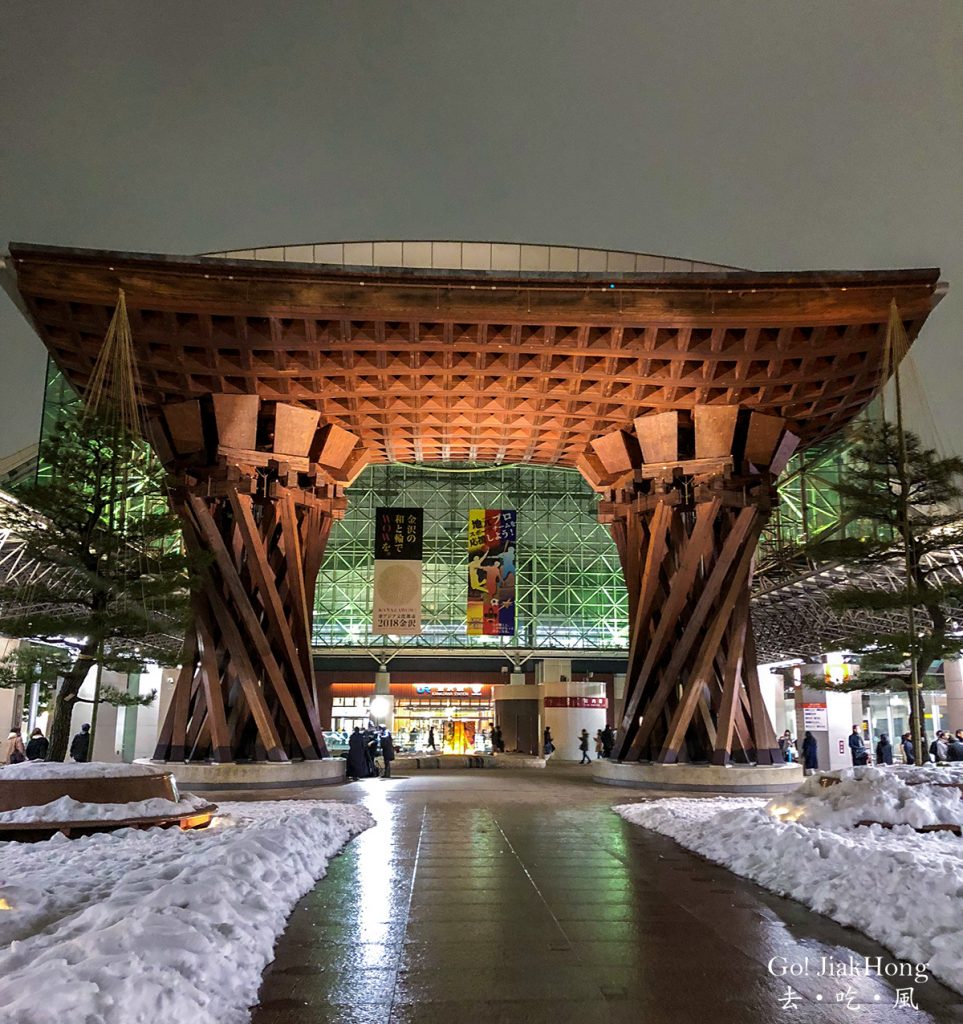 As Kanazawa is prone to frequent rain and snowfall, the massive dome made of aluminium and glass that covers the station plaza offers a shelter to passengers waiting for taxis and buses and the solar cells placed on the station roof also provide environmentally friendly energy saving. Events or arts will also be displayed here. 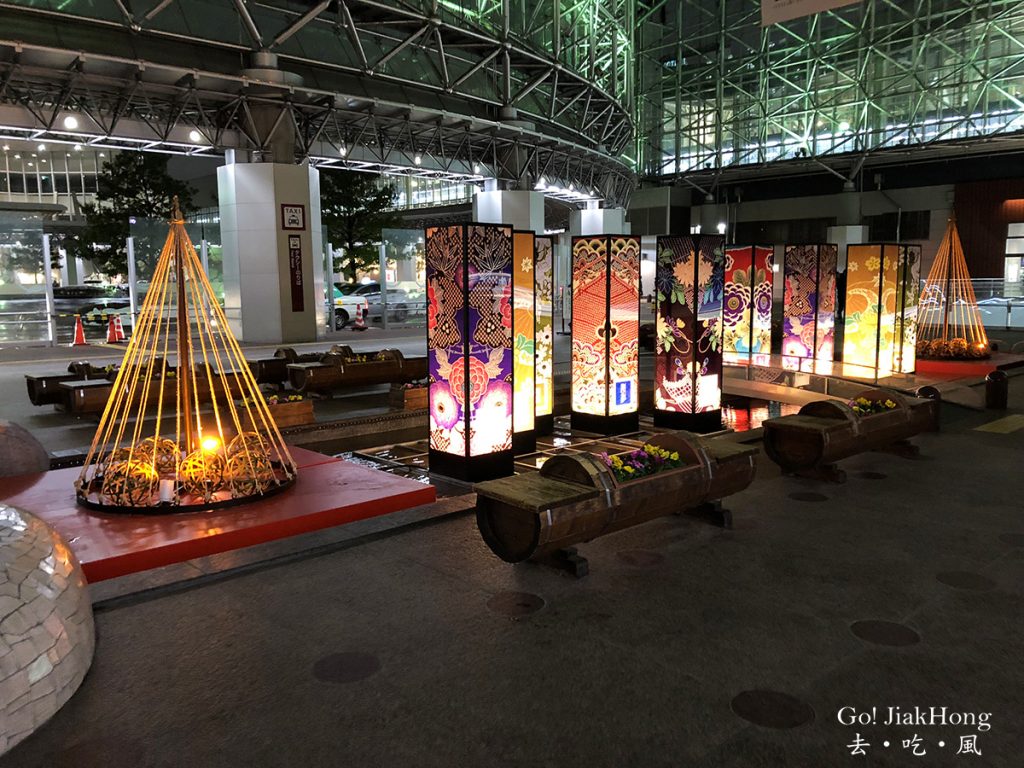 The largest fresh food market in Kanazawa since the Edo Period, and because of it’s the geographical located which is facing the Japan Sea coast it is famous for its fresh and yummy seafood. Take a stroll through Omicho Ichiba it will give you a glance of the wide varieties of seafood and fresh food in Kanazawa. 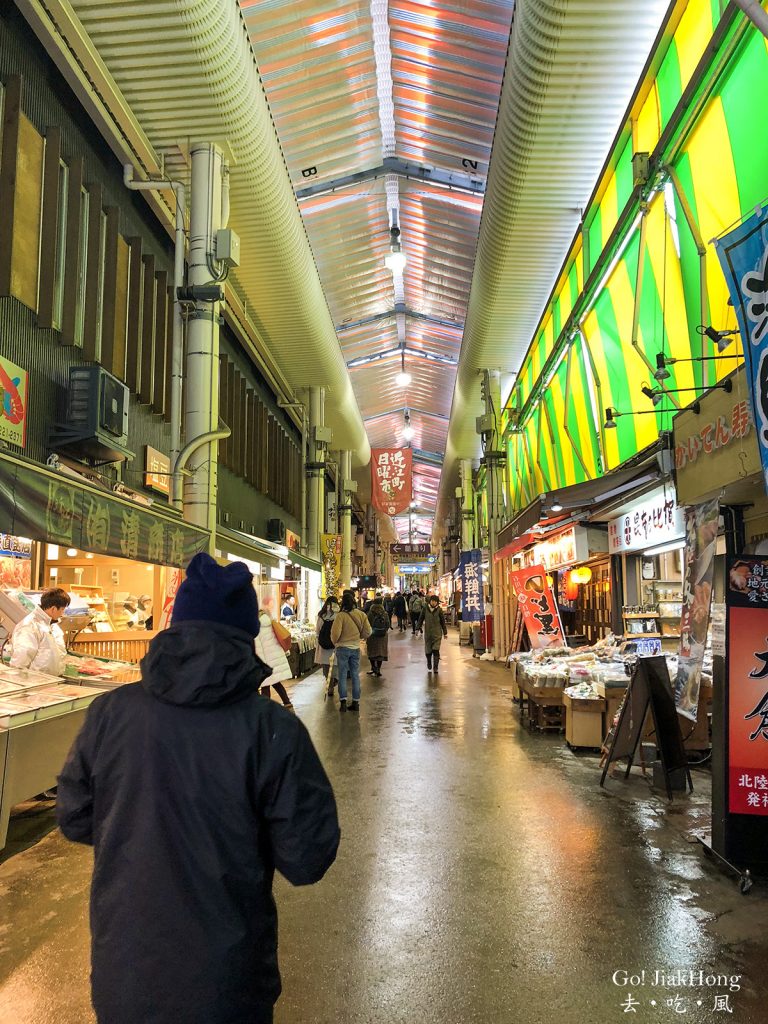 It varies by individual shop, however, most stalls are closed on Sundays, national holidays or Wednesdays, as well as during the New Year holidays.

The fresh seafood store, where they sell clams, oysters and fishes. 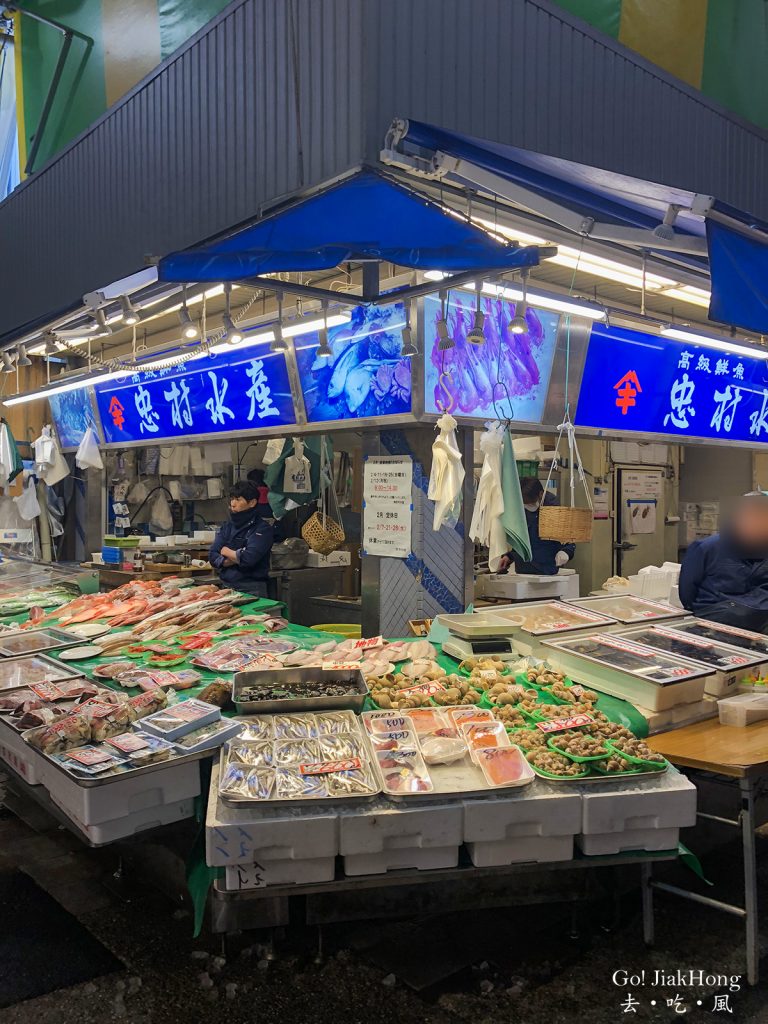 Omicho market is well known for its Zuwai-Gani (Snow Crab), if you are interested to have a taste of it order them at a restaurant and let them cut it for you. 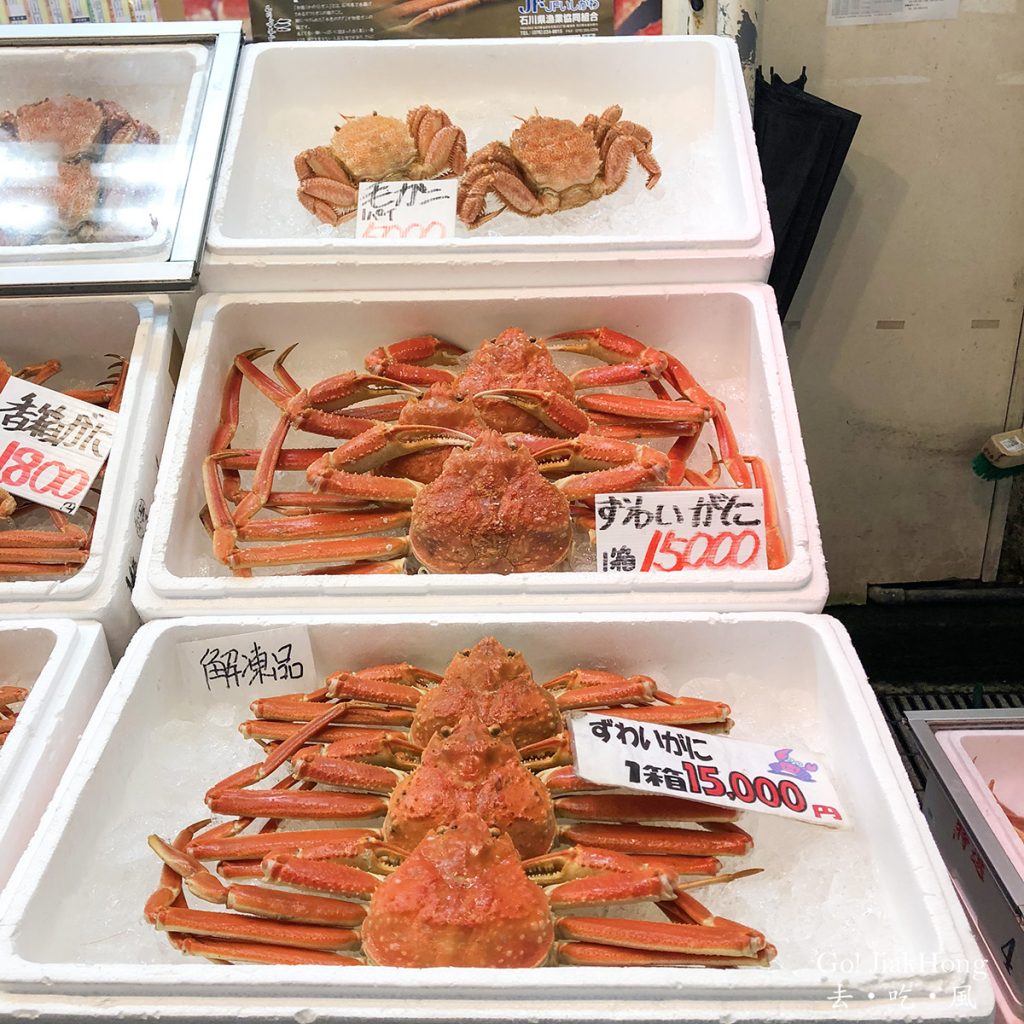 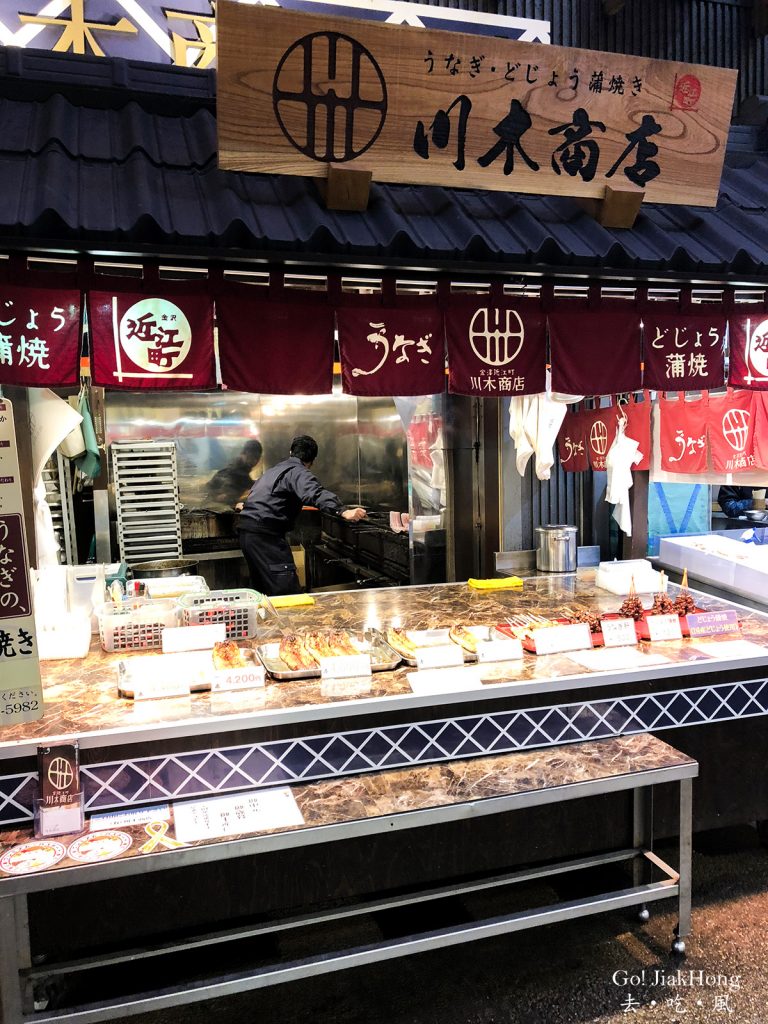 Get down here early as the tourist crowd always comes in the afternoon. If you intend to have a seat at the famous sushi restaurant, Mori Mori sushi be prepare to queue, other than that there are quite a lot of restaurants inside the market for instances, Yama san which is famous for its Kurashi don and some street stalls that you can order the fresh seafood and stand in front of the stall to eat.

Want to know where to have fresh seafood gourmet click here.

Standing right in the centre of Kanazawa City,  just across the road from the most visit attraction, Kenrokuen Garden. The castle has played a central role in Kanazawa’s history and though once neglected, it has been extensively rebuilt and renovated in recent years. 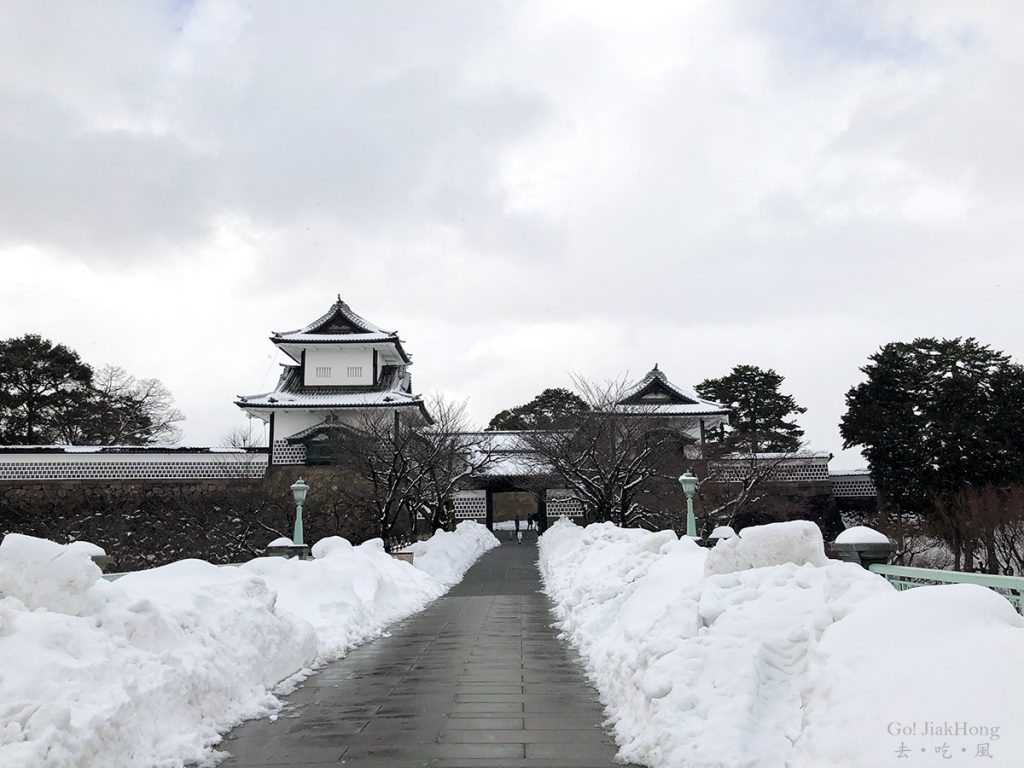 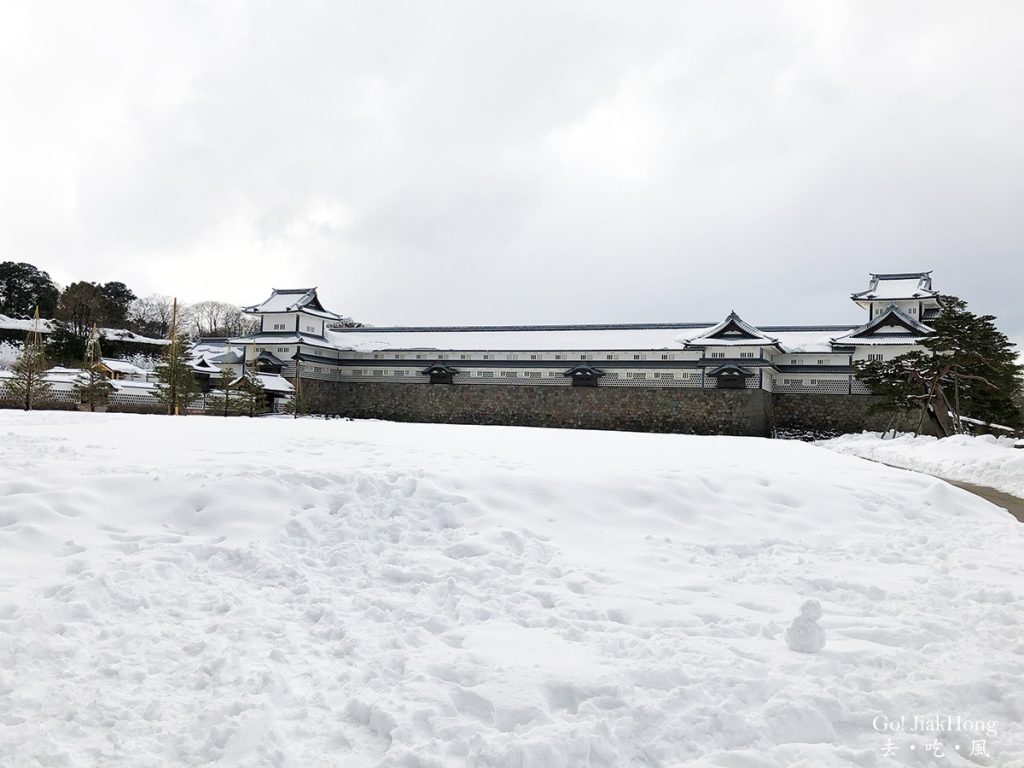 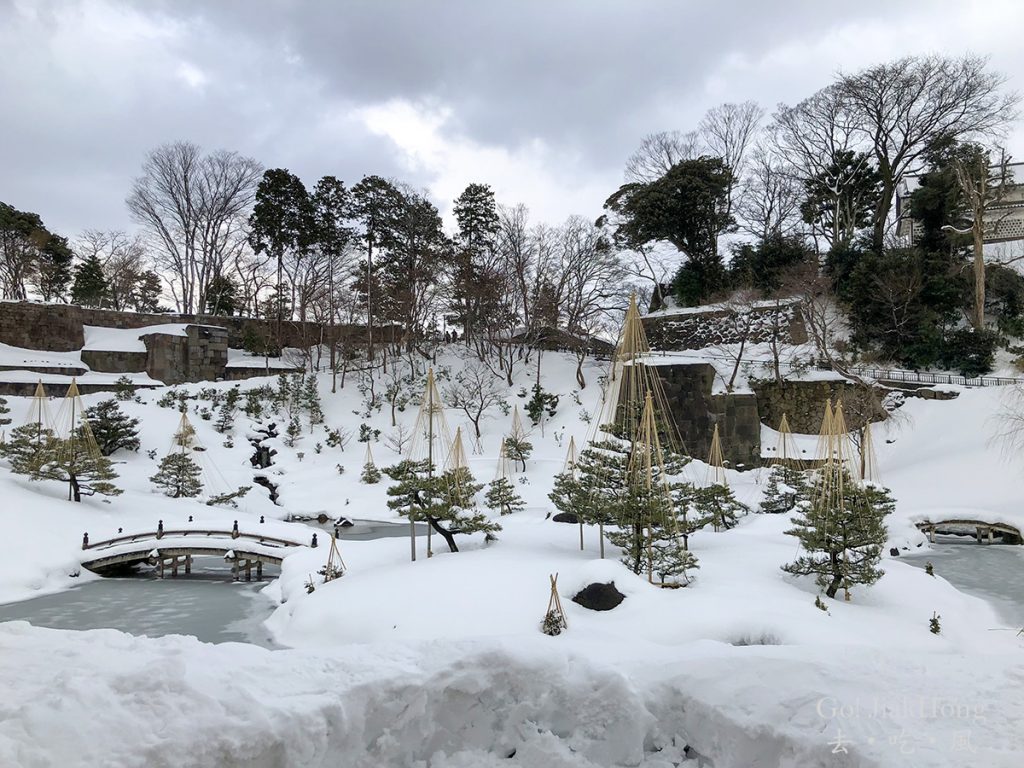 Enter here to see the history of Kanazawa castle 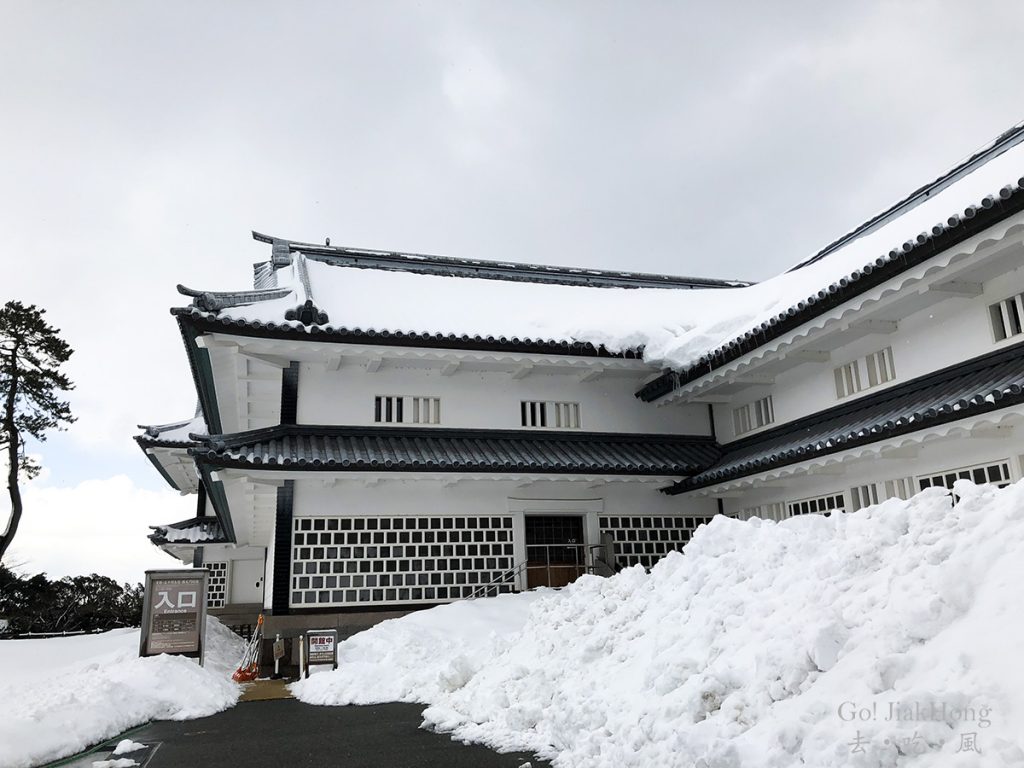 Get the Kenroku en ticket with Gojukken Nagaya Storehouse and Turrets, which cost 500JPY,  if you are interested to have a look inside the castle. Inside the castle is a short and simple tour which takes less than 1-hour, there are interesting photo spots where you are able to have a view of the city.

Kenrokuen is the city’s major attraction and one of the top three most beautiful garden in Japan. Covering almost 25 acres, which was once the outer garden of Kanazawa Castle. Kenroku en is beautiful all season, during the winter season, the rope umbrella (Yukitsuri) are there to protect the pine trees from the heavy snow. 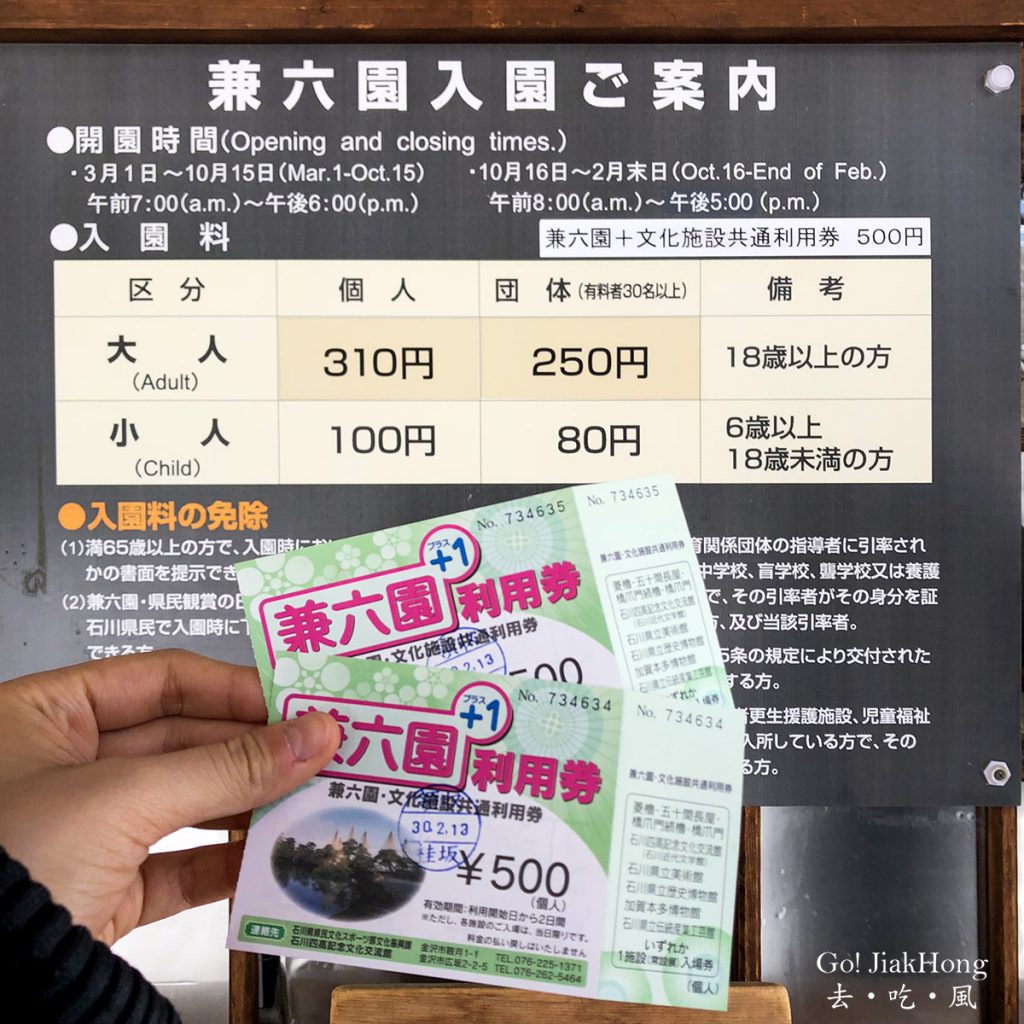 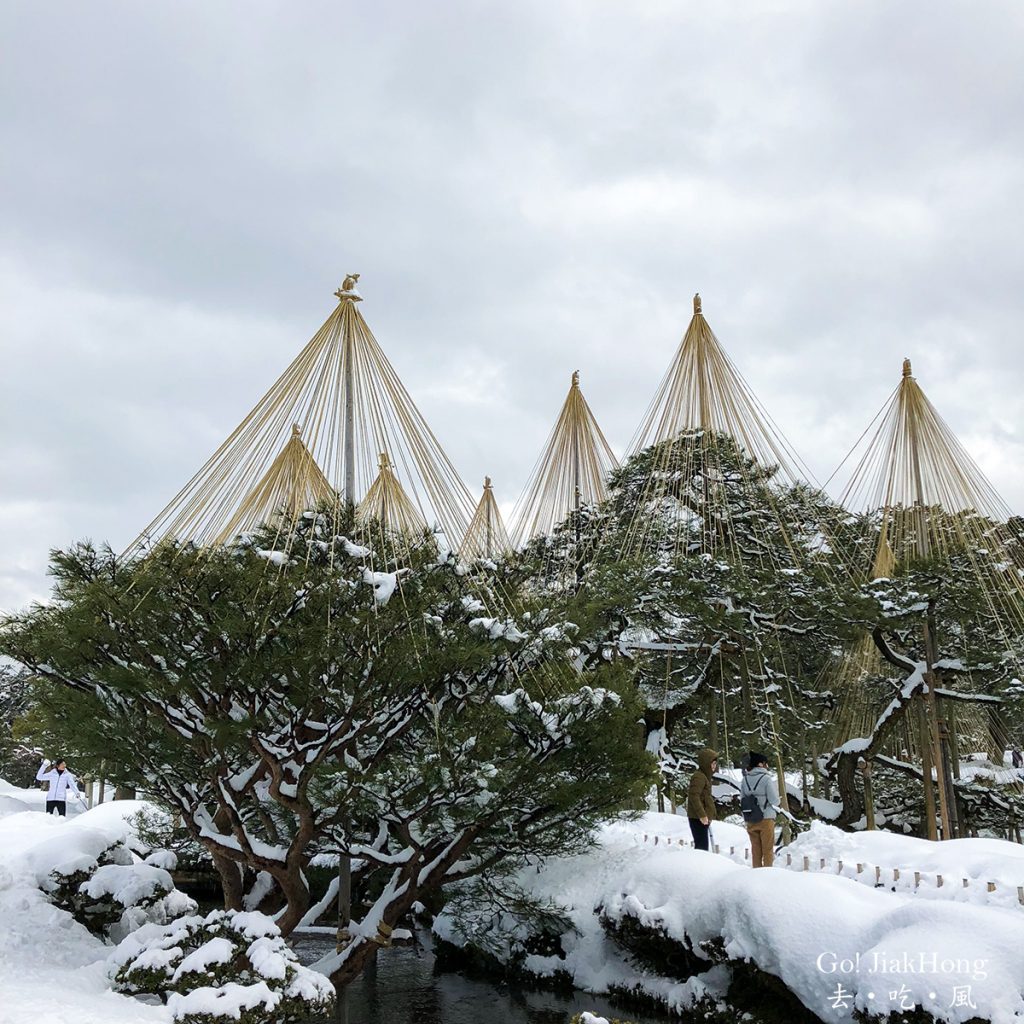 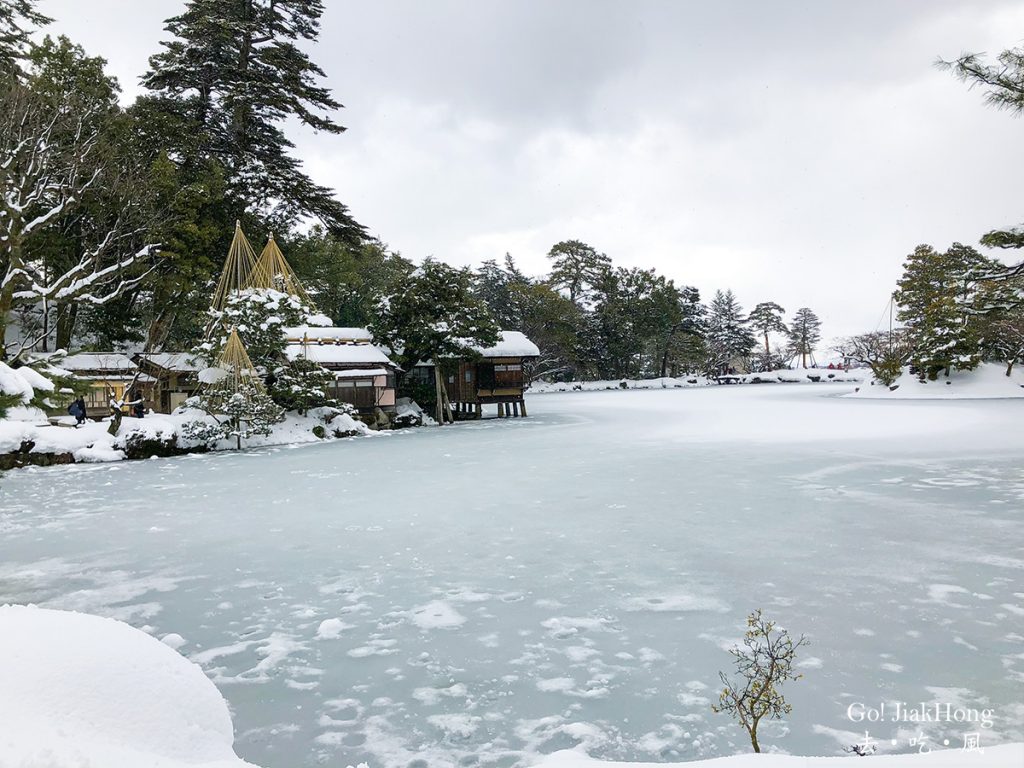 Visit Kenroku en first then walk over to Kanazawa castle, which I felt that this walking route is better because you might need more time to explore the Kenroku En. During winter, the walking route up might be tough for friends who are not used to the winter ground as it is slippery even though straw mats are laid on the floor.

Higashi Chaya district is a beautifully preserved historical area of Kanazawa with many traditional wooden buildings. It is known to many that it looks like a little “Kyoto” but with a manlier feel where the buildings are duller in colour and look more rigid. Higashi- Chaya Gai was once a teahouse district where the rich and noble will come here for entertainment which was performed by Geisha.  Now the building is being preserved and converted to restaurant or souvenir shop, however, there are still two geisha teahouse open to the public during the day. 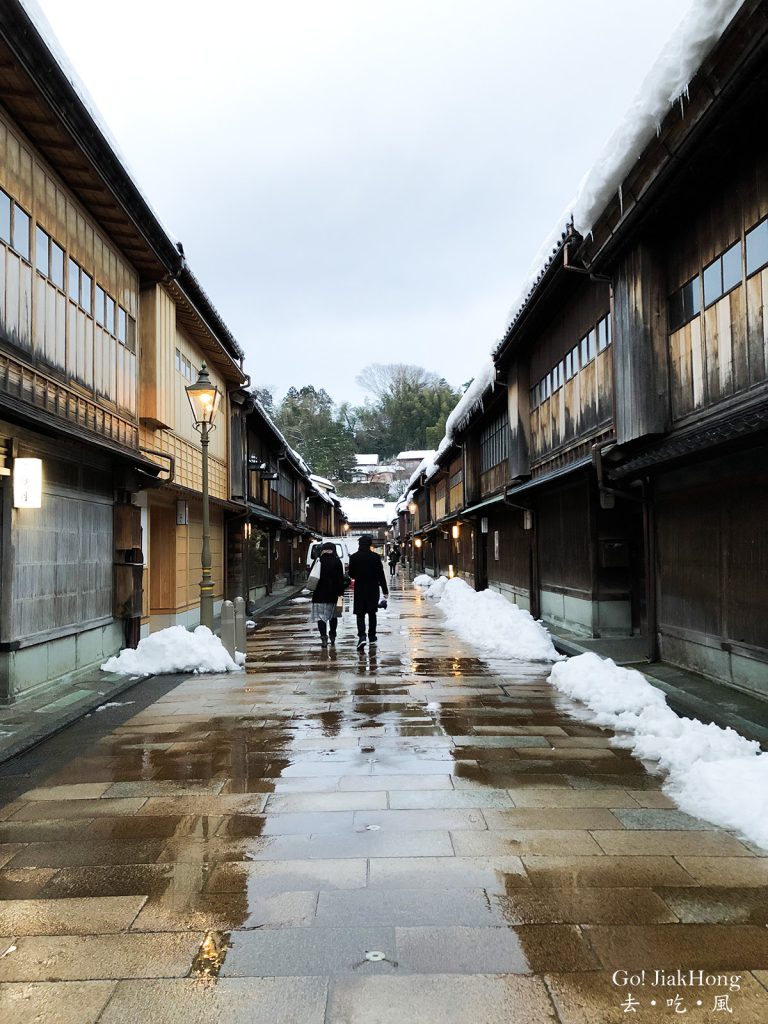 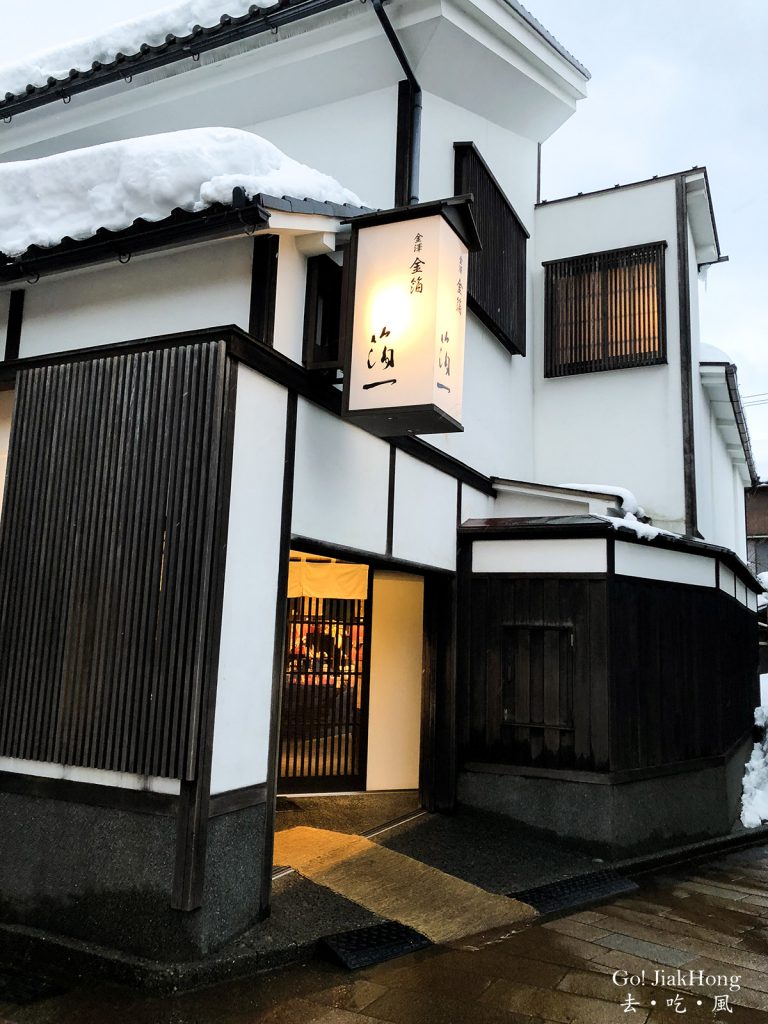 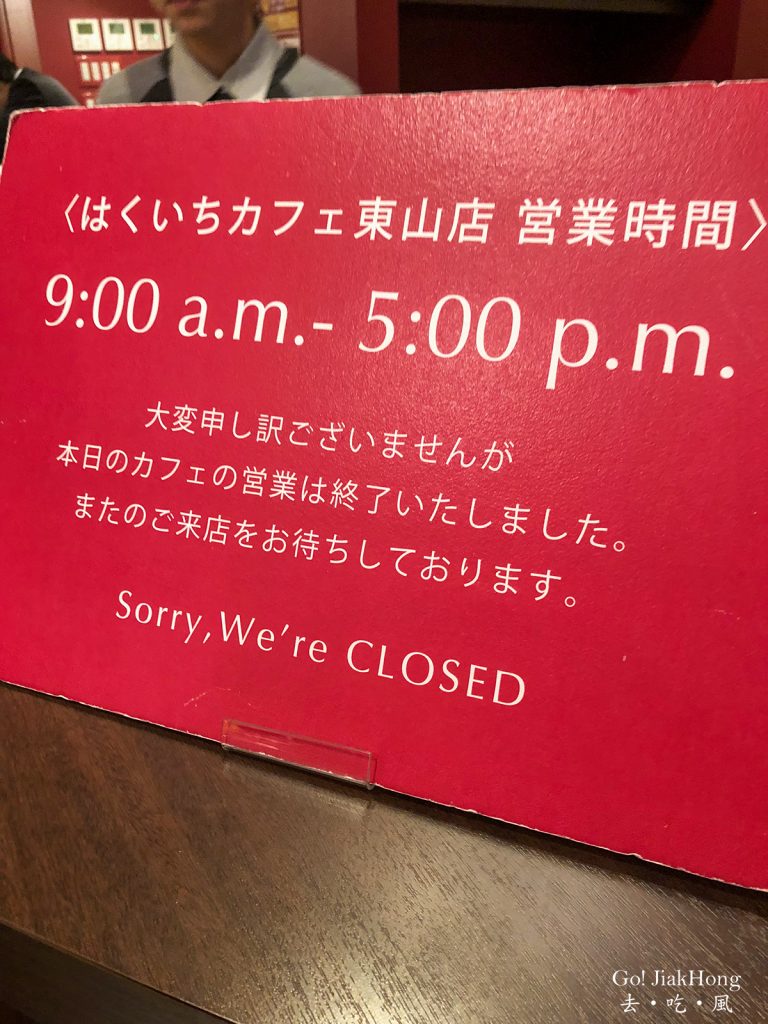 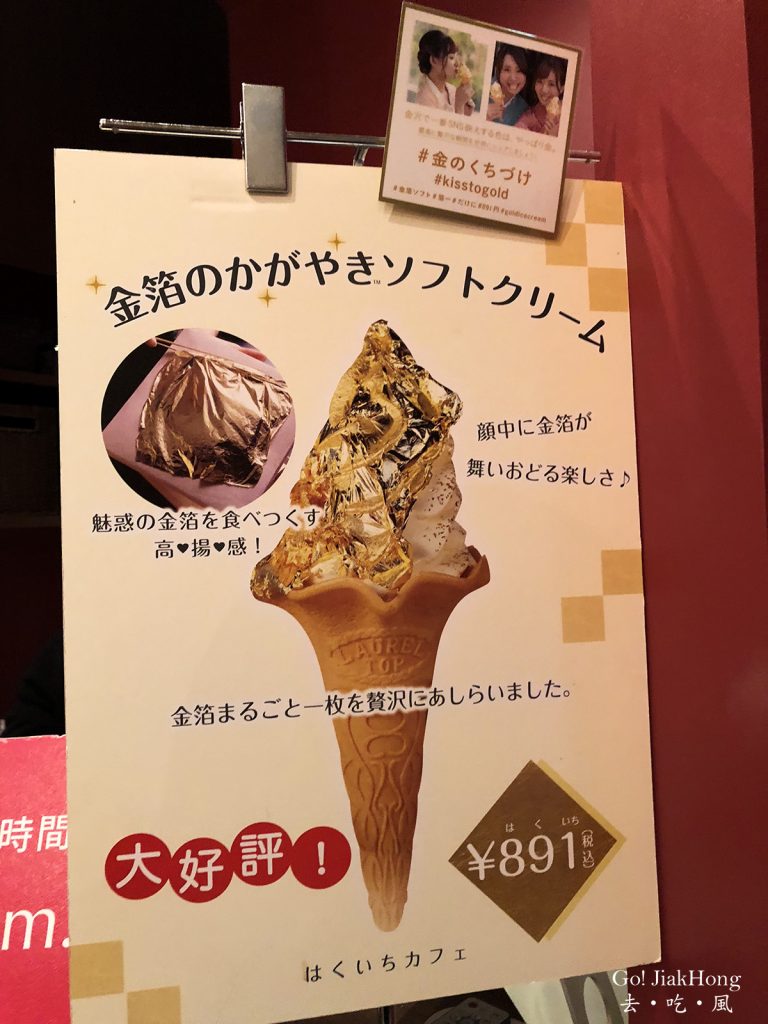 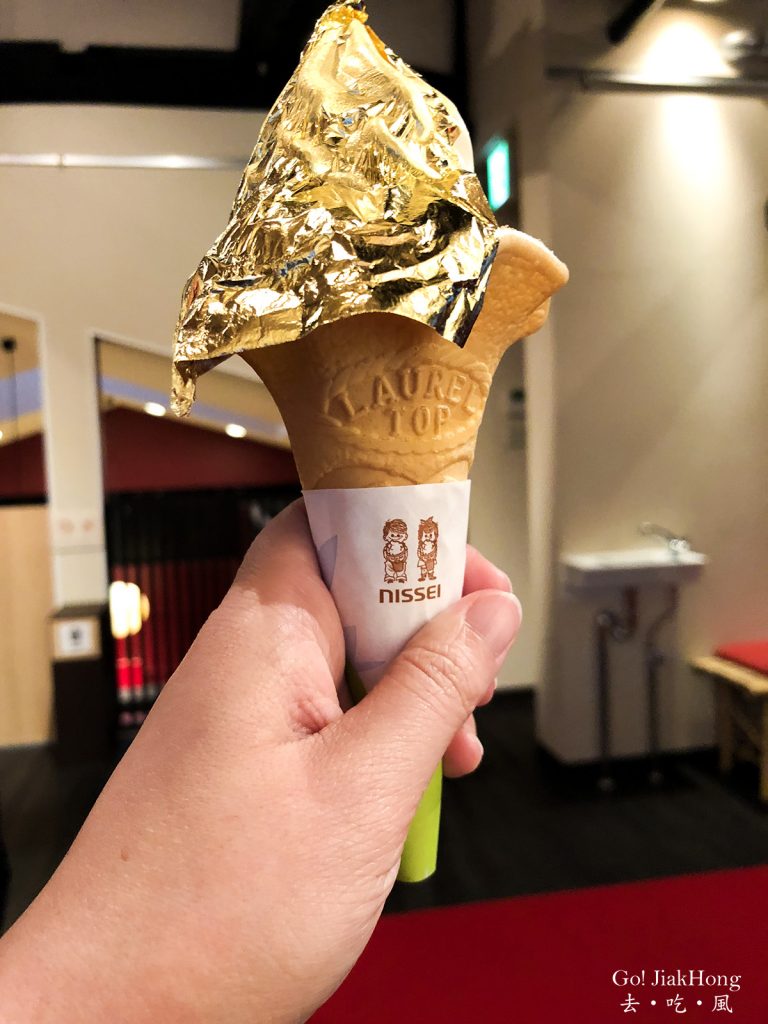 The Hakuichi Higashi main store is always crowded with tourist to have a try of the golden foil ice cream, there are actually a few outlet around Kanazawa so it is okay if you missed it there. When there are huge crowd inside the store will open up the other counter at the 3rd floor. To be honest, the ice cream is nothing fancy just a vanilla ice cream and it tastes a little metallic with the golden foil, however, it is Instagram-worthy. 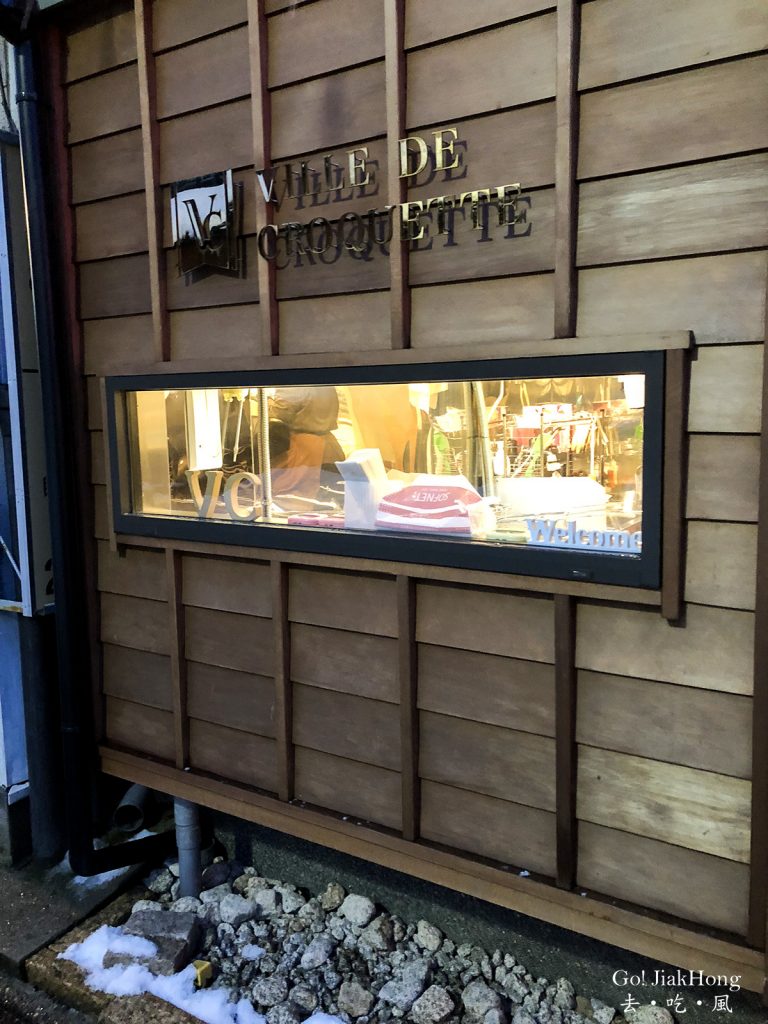 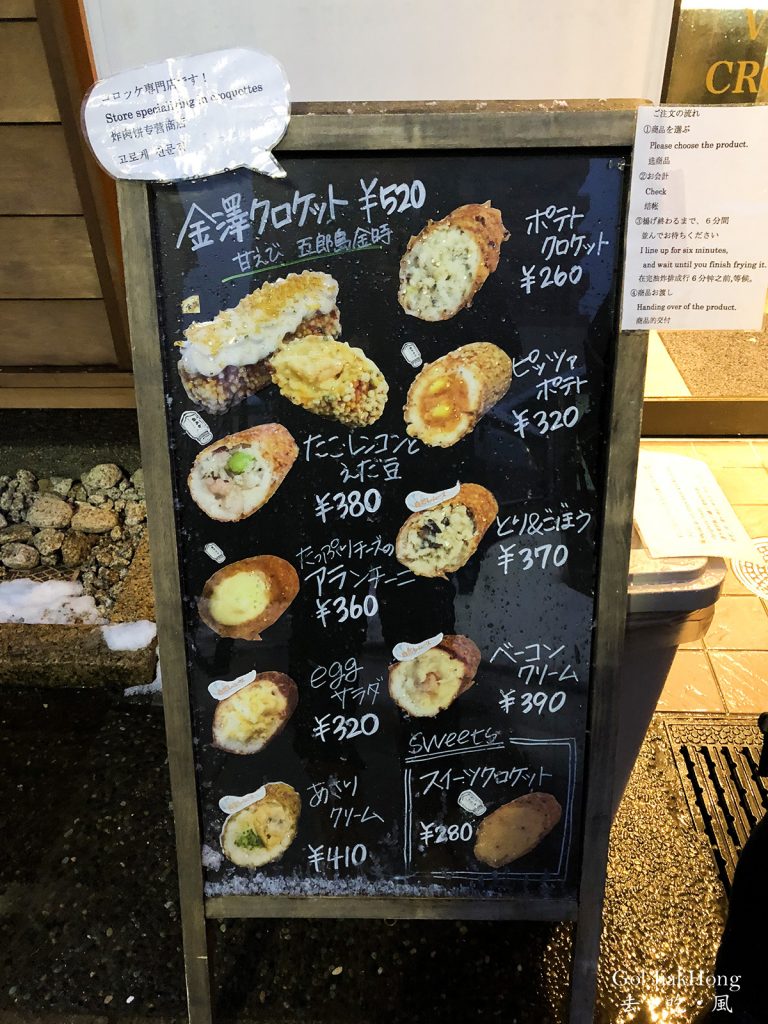 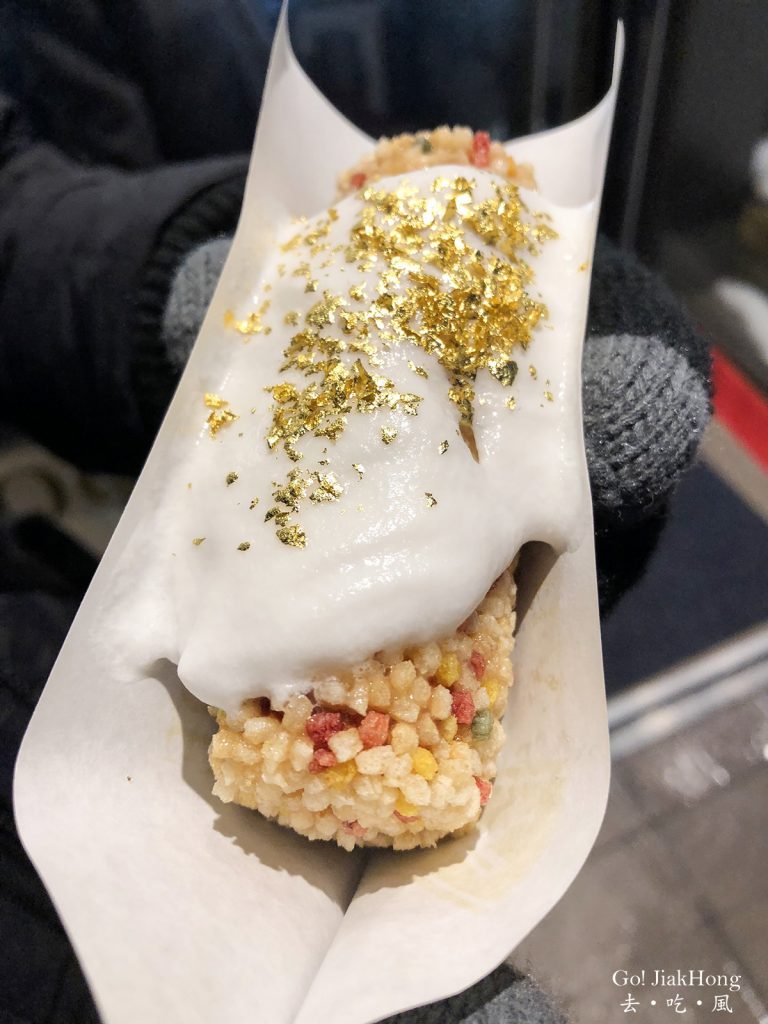 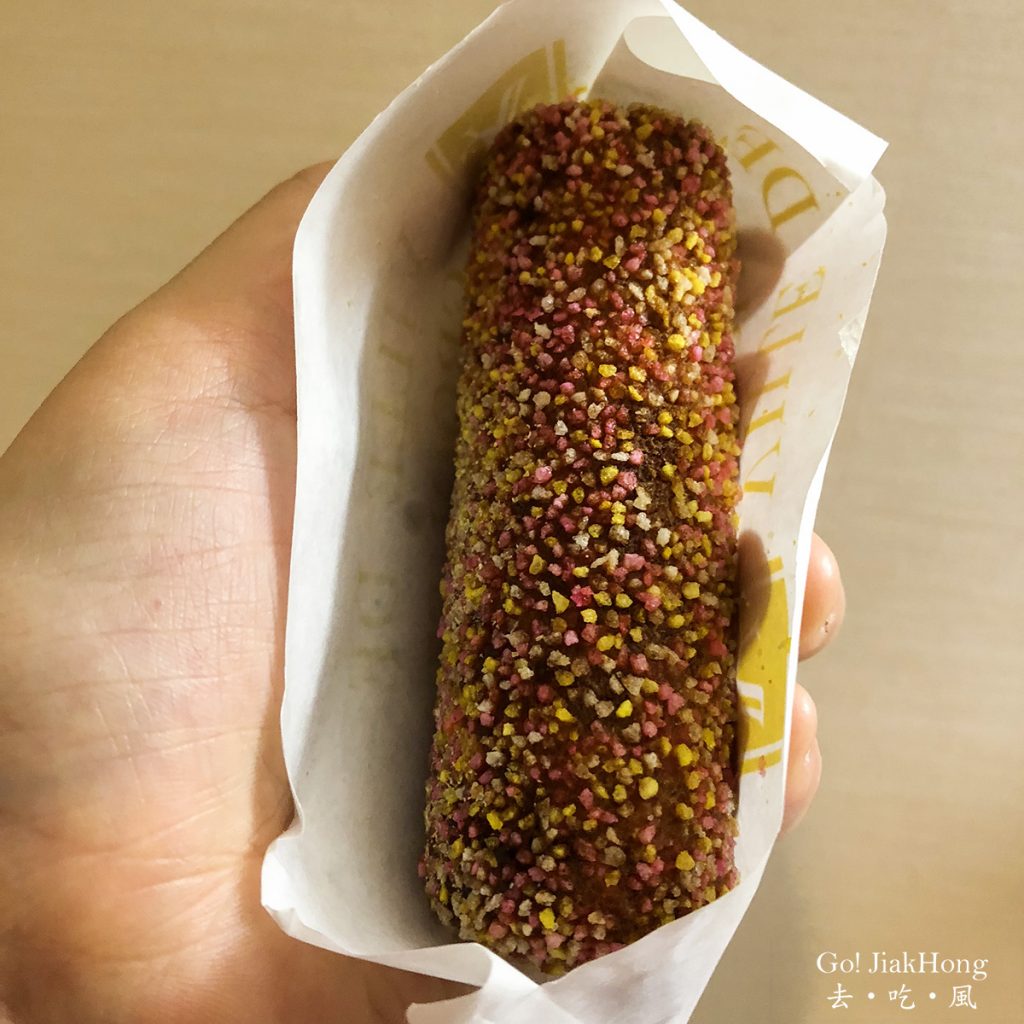 The only store in Japan that sell croquette with golden flakes and cream, this is the next hot thing in Kanazawa where people take time to queue for it. Be there after 4 or 5 pm there will be a lesser crowd and shorter waiting time.

Higashi Chaya district is beautiful in the late afternoon, where there is a lesser crowd and more comfortable to have a stroll around the old building. We did not plan to go there early as we only thought of taking photos which we did and we were lucky to be able to try out both golden foil ice cream and croquette.